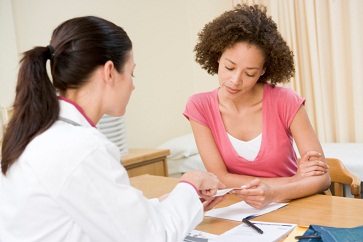 Actress Cobie Smulders a couple years back shared details of her ovarian cancer diagnosis at the age of 25 in an essay.

“Just when your ovaries should be brimming with youthful follicles, cancerous cells overtook mine,” she wrote in Lenny Letter, “threatening to end my fertility and potentially my life.”

The mother of two was trying to raise awareness of the cancer, which, while uncommon for younger women, still strikes some at a young age. About 90% of women who get this form of cancer are older than 40 years old, with the largest group age 60 and up, according to the CDC.

“Historically, ovarian cancer has been called the silent killer,” says  Dr. Nikki Neubauer, a gynecological oncologist at Advocate Good Samaritan Hospital in Downers Grove, Ill. “However, we now know that many women have some common symptoms, so identifying these symptoms is crucial in helping catch the cancer at an earlier stage, which may result in improved survival.”

When caught early, about 94% of patients live longer than five years, according to The American Cancer Society. But in many cases, ovarian cancer isn’t diagnosed until later.

So what signs and symptoms should women be aware of when it comes to this deadly form of cancer?

“I tell women I am concerned when they have symptoms that are new and persistent and don’t resolve with normal treatment options,” says Dr. Neubauer. “For example, when a woman goes to see her doctor about urinary urgency, they may give her antibiotics. If the urgency does not resolve itself with antibiotics, further investigation is required. In the end, women know their bodies best, so if you notice any of the above symptoms, you should bring them up with your physician.”

← How many people have a sesame allergy?
Are you too nice? →