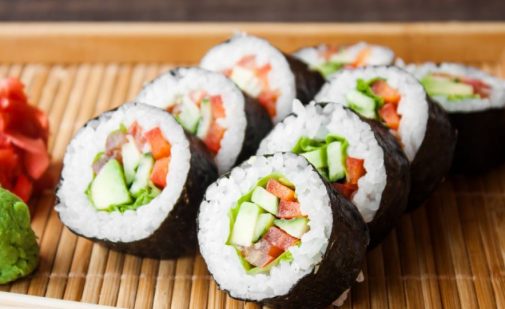 People of all ages are enthusiastic about the popular food, but have you ever wondered about its impact on your health or how much is too much?

Sushi is typically made of seafood, seaweed, rice and vegetables. It can be a great source of protein and omega-3 fatty acids.

“Omega-3s are essential oils that have anti-inflammatory benefits and support heart, brain and eye health,” says Kelly Whirity, a dietitian at Advocate Christ Medical Center in Oak Lawn, Ill. “Omega-3 fatty acids are found naturally in some foods. You can get adequate amounts by eating a balanced diet that includes fish and seafood such as salmon, tuna, herring and sardines. They are also found in nuts, seeds and plant-based oils.”

Depending on your choice of sushi roll, amount and frequency of consumption, sushi can be a healthy meal choice. But remember to be cautious of things like mercury, sodium and carbohydrate ingestion to maintain a balanced diet.

“In moderation, sushi is a healthy way to get essential acids and proteins. Just be wary of overdoing it with other additions to your seafood,” says Whirity. “Portion control is important when consuming sushi since the rolls are compact; they can include high amounts of calories.”

To avoid empty calories, avoid mayonnaise-based sauces such as “spicy mayo” and battered or deep-fried additives commonly labeled “tempura”. Healthy alternatives for adding flavor include wasabi and ginger, which also aid in digestion.

When being mindful of the recommended diet factors, sushi can be a healthy meal choice for the average person.

← Finding community after cancer and amid a pandemic
You might love them, but they pose a real danger →