Sunscreen myth can be deadly 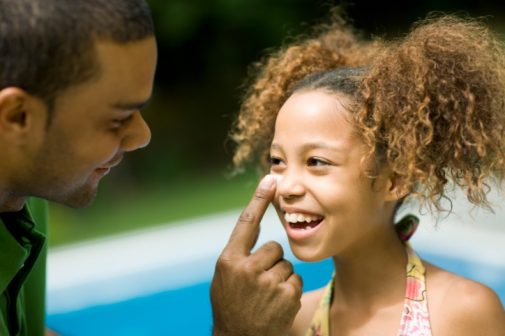 As summer arrives and people head outside, many African Americans are unknowingly putting themselves at risk for skin cancer.

“The natural melanin and darker skin pigmentation in typical African American skin does offer a small amount of protection,” he says. “But it isn’t nearly enough to prevent the harm done by the ultraviolet rays of the sun.”

According to the American Academy of Dermatology, African Americans are less likely than members of other racial and ethnic groups in the United States to develop skin cancer. However, Dr. Ward stresses, this does not mean that African Americans should ignore the possibility of this common cancer.

“The rates of occurrence for various type of skin cancer in African Americans may be lower,” he says, “but they are not zero. And any chance is too much with such a potentially deadly disease.”

If African Americans do develop skin cancer, says the Centers for Disease Control and Prevention (CDC), the outcome is often more serious than it is for other racial groups. According to a recent University of Miami study, African Americans are more than three times as likely as whites to be diagnosed with melanoma – the deadliest form of skin cancer – after it has reached a late stage, when treatment is more difficult and less effective.

“African Americans need to be aware of the dangers of sun exposure so they don’t miss clear signs that indicate something might be wrong,” says Dr. Ward. “Unlike many cancers inside the body that can’t be seen, these are cancers that can be caught at an early stage.”

Dr. Ward adds that late diagnosis of melanoma generally significantly reduces the chances for survival. The survival rate for those with early detection is about 99 percent, according to the National Cancer Institute. When detected later, the survival rate falls to between 15 and 65 percent, depending on how far the disease has spread. When melanoma has spread to other parts of the body, it is deadly.

Often, melanoma begins as an abnormal mole, says Dr. Ward. In white people, melanomas often develop on the trunk (chest and back) and legs, but he says that in African Americans, melanomas are most often found under the nails, on the palms of hands, and on the soles of the feet.

“Like people of all ethnicities and races, African Americans should develop an awareness of the moles on their bodies and be alert for new or changing moles,” Dr. Ward says. “And, African Americans should examine their fingernails and toenails for suspicious changes, including brown or black colored stripes under the nail or a spot that extends beyond the edge of the nail.”

Anyone who notices such changes, Dr. Ward says, should see a doctor immediately. Melanoma that is detected and treated early can usually be cured.

“It’s a myth that black skin doesn’t sunburn. It may take longer and it may not show up as red skin the way it does on lighter skinned people, but it does burn,” says Dr. Ward. “And, this myth should not keep African Americans from protecting themselves from sun damage and melanoma with sunscreen.”

Dr. Ward recommends that every person’s annual physical should include a skin examination. If recommended by a primary care physician, follow-up appointments should be made with dermatologist.

← Blog: All it took was a second
New concerns for workaholics →