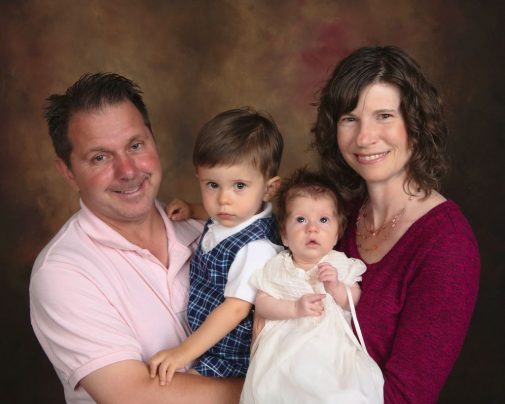 Abigail Louise Vogt gave her parents Linda and Kevin a scare well before she entered the world.

At 32 weeks, an ultrasound found that baby Abigail was surrounded by too much amniotic fluid in her mother’s womb.

“I knew I had gained weight during this pregnancy. I felt bigger than when I was having my son, Timothy, a couple of years before,” says Linda. “And people had begun asking me if I was expecting twins.”

Maternal fetal medicine specialists at the Center for Fetal Care at Advocate Children’s Hospital diagnosed the baby with duodenal atresia, a rare congenital digestive disorder in newborns. Pediatric general surgeon Dr. Bethany Slater was called in to prepare for Abigail’s birth and the surgery the tiny infant would require shortly after delivery. Dr. Slater would repair the intestinal blockage that would otherwise make it impossible for the baby to feed.

“I asked a million questions,” says Linda. “It was hard to imagine her needing surgery in the first couple days of life. While I was terrified, both the baby and I were determined to get through this. Dr. Slater was so reassuring.”

Thirty-eight weeks and one day into her pregnancy, Linda was induced, and little Abigail came out screaming during an emergency C-section. And, just two days later, she was undergoing surgery.

The minimally-invasive surgery is intricate in a tiny infant. “I did a laparoscopic bypass procedure to connect the portion of the intestine above the obstruction to the portion below it,” says Dr. Slater. Guided by a camera and monitor, the procedure was completed through three tiny incisions.

“The fact that we can now diagnose congenital issues so early has really made an incredible difference,” says Dr. Slater. “It enables us to counsel the parents and prepare them for quick action to correct the problem as soon as the baby is born.”

“Abigail only has three very tiny little marks to remind us of the surgery,” says Linda. “At a little over three months old, she is so active and so happy. We are very blessed.”

← Here’s how to get relief from fall allergies
Is this the secret to making your brain feel 10 years younger? →