She’s singing and dancing after heart surgery at age 5 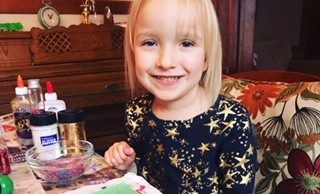 “It was a normal pregnancy, “says Brianne Magel, Eleanor’s mom. “I never imagined that I would need to become an expert in congenital heart defects and Loeys-Dietz syndrome. I spend a lot of time educating everyone around us, including some of Eleanor’s doctors.”

“We were told that her heart’s aortic root was enlarged and leaking,” says Brianne. “Even though it was far from our home in Iowa, we went to the Johns Hopkins University in Baltimore to see an expert for whom the disease is named.”

As Eleanor and her aneurism grew, it became time for surgery. The physician in Baltimore sent them directly to a pediatric cardiovascular surgeon, Dr. Luca Vricella at Advocate Children’s Heart Institute, one of only a few in the country who specializes in the rare surgery.

“Loeys-Dietz syndrome is a connective tissue disorder characterized by aortic aneurysms,” Dr. Vricella says. “The aneurysms weaken the aorta, the main artery in the body, and predispose it to rupture or dissection. During this very delicate surgery, we are able to replace the root but preserve the native aortic valve.”

“By replacing the root, we are able to prevent a sudden rupture, leading to sudden death,” says Dr. Vricella. “But because Loeys-Dietz syndrome is a multi-system disease, Eleanor will need lifelong follow-up to detect and treat any additional aneurysms that could form elsewhere.”

“As soon as I met Dr. Vricella, I said, ‘that’s the guy…that’s the guy I want to do my baby’s surgery,’” Brianne says. “After this experience, I would follow him to outer space to care for my child.”

“After the surgery, I said, ‘holy cow — she still has so much energy,’” says Brianne. “I understand that Eleanor will face limitations and that there could be more surgeries ahead.”

In the meantime, Brianne is focusing on what Eleanor can do.

“Since she can’t play contact sports, we introduced her to dance,” she says. “She also loves to sing!”

Want to help kids just like Eleanor? This October, all gifts made to Advocate Children’s Heart Institute will be matched by long-time supporters Jim and Joan Buschbach, up to a total of $30,000! Click here to make a donation.

← Is this making your stomach hurt?
Do you need more ginger in your diet? →