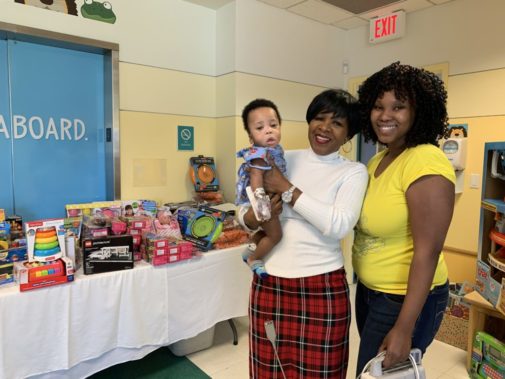 For the eleventh year in a row, Jessie Tendayi, a cafeteria worker from Advocate Trinity Hospital in Chicago, turned a waiting room at Advocate Children’s Hospital into a real-life toy store.

Jessie donates thousands of dollars’ worth of toys to the young hospitalized patients to lift their spirits and spread holiday cheer. She has been making the annual toy donation since 2008 when she first donated 100 toys.

This Thanksgiving, when others were eating a turkey dinner, Jessie was out purchasing toys. She begins her shopping at the end of December for the following year and continues purchasing for the next twelve months. She saves money from each paycheck and works extra shifts to fund her mission of bringing a touch of happiness to the lives of sick children.

This year, the toys were set up in two waiting rooms and displayed to mimic toy stores. Young patients struggling with various health issues had the opportunity to come to the room, which was filled with toys from wall to wall, where they were able to choose multiple gifts for themselves and siblings. Jessie also made bedside visits, something she treasures every year, to hand deliver toys to children who were too sick to leave their room.

Jessie’s kindness and generosity have brought thousands of smiles to sick children and their families over the past 11 years.

← Are your feet cold? Swollen? 8 signs you shouldn’t ignore
Medical myths that harm, not help →