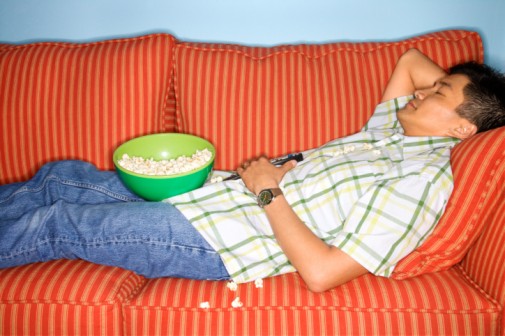 A lack of sleep combined with easy access to plenty of food is a recipe for weight gain, researchers say.

The results of a small study done at the University of Colorado Boulder showed that people who slept just five hours a night with unlimited access to food and snacks gained almost two pounds in just a week.

During the study, sixteen young adults lived for two weeks at the University’s sleep lab. For the first three days, all the participants slept nine hours per night and were supplied just enough calories they needed to maintain their current weight. After that, they were split into two groups. The first group slept only five hours each night, the second group slept nine hours.

All the study members were offered larger meals and plenty of snacks throughout the day. After five days, the groups swapped sleeping schedules.

The five-hour sleepers tended to ramp up their eating and binged on evening snacks. The amount of calories contained in those late night nibbles was larger than the calories that made up any of their individual meals. Researchers say this is more evidence that late night eating may contribute to weight gain.

“Just getting less sleep, by itself, is not going to lead to weight gain,” said study leader Kenneth Wright in a news release. “But when people get insufficient sleep, it leads them to eat more than they actually need.”

But there is hope for those late night snackers says Anna Jurmann, a registered dietitian at Advocate Good Samaritan Hospital in Downers Grove.

“It’s all about breaking bad habits,” Jurmann says. “If you feel the need to snack in the evening choose something healthy to swap out for the junk. A high fiber cereal with a little milk is good. And yogurt beats ice cream every time.”

← Aspirin may be key in fight against melanoma
Without new antibiotics, growing resistance a ‘ticking time bomb’ →