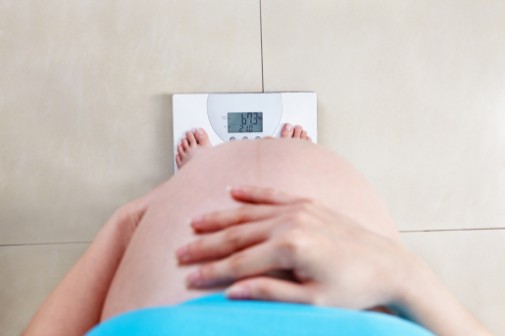 Reasonable pregnancy weight gain is natural and beneficial for your baby’s growth and development. However, researchers have found that too much weight gain during pregnancy may have a negative body impact on the baby later in life.

Researchers studied the body mass index (BMI) of 42,133 mothers at birth along with the BMI data of their children until age 12, totaling approximately 91,045 children. They then compared the BMIs of each mother between her pregnancies to see if the mother’s weight gain changed and if that influenced her child’s weight.

They discovered variations in pregnancy weight gain accounted for a half unit difference in child BMI at an average of 12 years.

So how much weight gain is healthy or expected when you’re expecting?

For the most part, doctors caution women against following the old cliché of “eating-for-two during pregnancy.” Health experts say women should focus more on healthy eating and moderate weight gain instead. In fact, the Institute of Medicine (IOM) recently updated its guidelines on how much weight women should actually gain during pregnancy.

The IOM recommends women, who have a body mass index (BMI) of 25 to 29.9, gain no more than 15 to 25 pounds during pregnancy if they are carrying just one baby. And women who have a BMI of 30 or higher, should gain as little as 11 pounds, according to the IOM.

The maximum weight gain recommended for women who are considered to be overweight is 20 pounds. For women in the normal weight weight range and who have a BMI of 18.5 to 24, it’s okay to gain 25 to 35 pounds, says the IOM.

According to Dr. Akemi Nakanishi, obstetrician/gynecologist with Advocate Condell Medical Center in Libertyville, Ill., “It really does depend, but we look at the woman’s pre-pregnancy weight to make recommendations.”

For example, she says, if a woman is of normal weight for her height, then the expected weight gain during pregnancy should be between 25 and 35 pounds.

“However, if a woman is obese, then weight gain might be less than 15 pounds. The opposite is true if a woman is underweight, then maybe she needs to gain more during pregnancy,” Dr. Nakanishi adds.

← Boosting brain power as you age
Dangers of drugged driving →