Home / Parenting / Are kids too addicted to mobile devices?

Are kids too addicted to mobile devices? 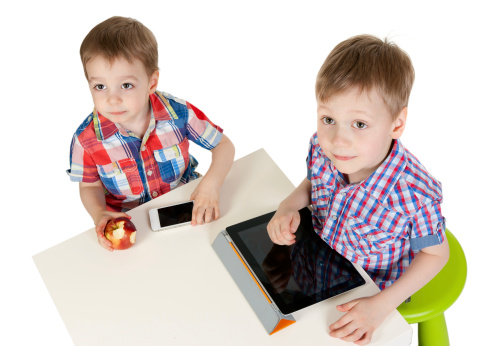 Kids are far more technologically savvy today than ever before, and as more families use mobile devices such as tablets, e-readers and laptops, the amount of digital screen time among kids has increased.

According to Common Sense Media, families with children 8 and younger have seen a fivefold increase in ownership of tablets (to 40 percent from 8 percent), and the percent of children with access to some sort of smart mobile device at home has jumped to three-quarters (75 percent) from half (52 percent).

The American Academy of Pediatrics (AAP) recommends that parents limit kids’ “entertainment screen time” to less than one or two hours per day, and in children younger than 2, “discourage screen media exposure.”

In addition, the AAP is urging pediatricians to ask a couple of questions of their patients during well-child visits: How much time is the child spending with media? Is there a television and/or Internet-connected device in the child’s bedroom?

“A healthy approach to children’s media use should both minimize potential health risks and foster appropriate and positive media use—in other words, it should promote a healthy ‘media diet,’” said Dr. Marjorie Hogan, co-author of the AAP policy, in a statement. “Parents, educators and pediatricians should participate in media education, which means teaching children and adolescents how to make good choices in their media consumption.”

But how realistic is this in a 24/7 media world, especially when mobile devices are increasingly popular tools for education, as well as entertainment?

According to a recent study, while kids may be more media savvy, parents are not reporting their children’s media usage as causing them concern.

Still, physicians recommend for the sake of the child’s overall health to limit computer, mobile device and TV time. Dr. Jennifer DeBruler, a board certified obesity medicine physician with Advocate Medical Group, says, “I recommend two hours of TV and/or computer time as a limit. That can help keep them active, and prevent weight gain. But I also strongly recommend against putting a TV in your child’s bedroom, as it just encourages sedentary behavior.”