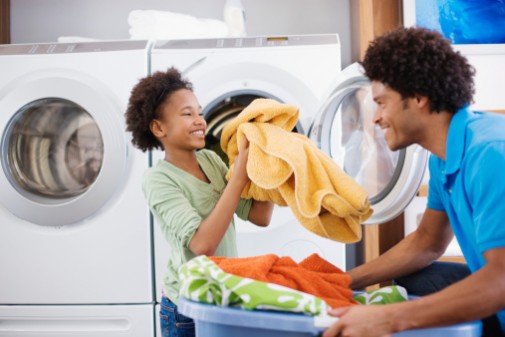 Dads who do their fair share of household chores can influence their daughters’ career paths, say researchers at the University of British Columbia (UBC).

“This suggests girls grow up with broader career goals in households where domestic duties are shared more equitably by parents,” Croft says. “How fathers treat their domestic duties appears to play a unique gatekeeper role.”

Speaking on gender equality alone can only go so far, and actions speak louder than words, according to the study. When gender roles are very explicit between the man and the woman, the daughter is more likely to follow female-dominant career paths such as a nurse, teacher or being a stay-at-home mom.

The study involved about 330 kids between 7 and 13 years old. Both the children and at least one of their parents were surveyed about their paid labor and household chores. Career stereotypes that participants identified with, gender and work attitudes, and the kids’ futures career choices were all determined.

The families were selected at random, according to the study. Child participants were surveyed and asked questions such as, “Who are you more similar to?” The children were also asked “who they thought they would resemble more when they grow up.”

The study found that households where the mother performed most or all household tasks set the example for children to believe that those roles were females. Daughters in those households then wanted to be caregivers when they got older.

“‘Talking the talk’ about equality is important, but our findings suggest that it is crucial that dads ‘walk the walk’ as well – because their daughters clearly are watching,” Croft says.

She also explained that when fathers help with the dishes or other household chores, daughters are more likely to follow non-traditional gender roles such as not being a stay-at-home mom or following roles that may be considered male-dominant. Role models in general were found to be beneficial – it was particularly consistent when fathers demonstrated gender equality.

The study concluded that fathers who demonstrated gender equality were more effective.

You can learn more about the study here.