Home / Behavioral health / You may have nomophobia

You may have nomophobia 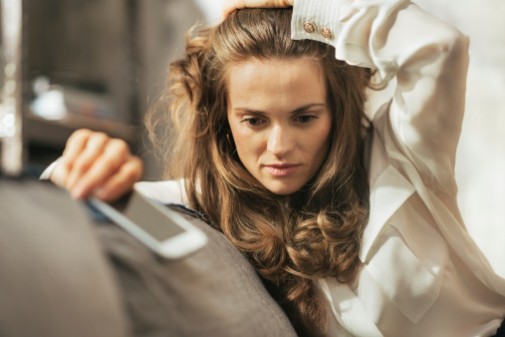 They are used to post on social media, take photos and record videos, as well as for driving directions, doing math, playing games and making phone calls. Being away from it, even for a short time, can cause anxiety, and now there’s a name for that.

It’s called nomophobia, or “no-mobile-phone phobia.” It’s a fairly new term coined by a study that looked at anxieties suffered by mobile phone users who fear being without their phones.

To help better understand this phenomenon, researchers from Iowa State University developed a two-part study to help understand the dimensions of nomophobia. They  also developed a questionnaire to measure the severity of the condition.

A small number of college students were interviewed to identify four dimensions to nomophobia – not being able to communicate, losing connectedness, not being able to access information, and giving up convenience.

Each participant was asked to rate each statement from one (strongly disagree) to seven (strongly agree).

Study leaders were able to quantify the severity of nomophobia through their research.

“As people start relying more on their smartphones, they get used to the luxury and convenience they provide and they simple do not want to give up on that,” lead study author Caglar Yildirim said in a news release. “I was shocked by how times people said they would feel naked if I didn’t have my phone today with me.”

Yildrim wanted to stress that this is not an addiction, instead it’s a situational phobia.

Recognizing the problem is the first step towards a bigger breakthrough. Researchers plan to look at other psychological traits, gender and age to better understand who is susceptible to nomophobia. A better understanding will be able to help experts to develop methods for smartphone use.

Dr. Gabrielle Roberts, a clinical psychologist at Advocate Christ Medical Center in Chicago, recommends people set limitations to help them counteract their dependency to the devices.

“Creating rules and boundaries around electronics for everyone is not only a good strategy for limiting device use, but more importantly, it can create more opportunities for quality interactions with people, which are essential to healthy development,” says Dr. Roberts.

← Infographic: Should all fruits and veggies be bought organic?
Is CPR more successful on TV than in real life? →