Home / Brain & Neuro / Are athletes drinking too much water?

Are athletes drinking too much water? 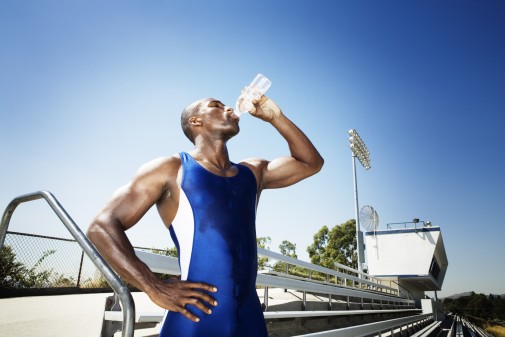 Most people are aware of the dangers of not drinking enough water while exercising, but many are not aware of the potentially serious hazards that come with ingesting too much.

Many athletes “hyperhydrate,” or ingest large amounts of fluids to boost performance, but this can lead to exercise-associated hyponatremia (EAH). This occurs when a person’s body has too much water in relation to its salt level, which can lead to serious brain and nervous system issues, and even death.

In an effort to promote healthy hydration, an international group of 16 experts from four countries recently issued a new set of guidelines in the Clinical Journal of Sports Medicine. The recommendations center around the idea that athletes and other active individuals should listen to their bodies and use thirst as their guide to hydration.

According to the guidelines, using the innate thirst mechanism to guide fluid consumption is a strategy that should limit drinking in excess and developing hyponatremia while providing sufficient fluid to prevent excessive dehydration.

EAH, which can happen during physical activity or up to 24 hours after completing an exercise, is often referred to as “water intoxication” because of its typical symptoms of headache, vomiting, confusion and seizures, and sometimes weight gain.

“There is no doubt that proper hydration is a smart and healthy part of any athletic training or competition,” says Dr. James Krcik, orthopedic surgeon and sports medicine physician at Advocate South Suburban Hospital in Hazel Crest, Ill. “But, the old ‘drink before you get thirsty’ thinking needs to be reevaluated and carefully considered by athletes and other active people.”

According to the panel that issued the guidelines, EAH has been primarily an issue affecting endurance athletes such as marathon runners, but the increasing incidence of EAH in more sports led to a call for new recommendations.

“Many active people are taking a ‘more is better’ approach when it comes to fluid intake, but they may be doing more harm than good,” says Dr. Krcik. “The mindset of using thirst as a guide to hydration is very important for athletes to consider as they prepare and compete.”

Dr. Krcik says parents have to be extra careful as their kids are trying to stay hydrated and may not fully be able to understand the dangers of EAH or monitoring the amount of fluid consumption. In addition, athletic training staffs should be closely monitoring athletes’ body weights to manage the proper amount of fluid replacement.

He also cautions that the risks of EAH apply whether people are drinking water or sports drinks, although sports drink do contain some sodium and may decrease the risk slightly.

The most important thing to do if you suspect you or someone around you may be suffering from EAH, says Dr. Krcik, is to stop drinking immediately and contact medical help.