Cooking tips for a hazard-free Thanksgiving 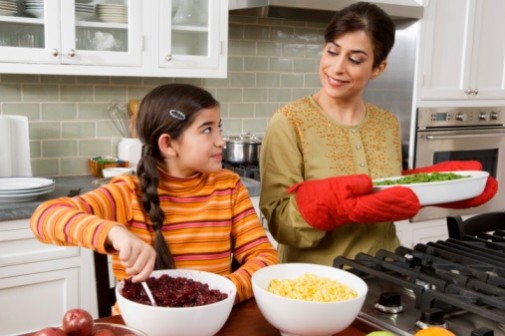 The kitchen is often the center of Thanksgiving celebrations, and all that extra cooking and commotion can lead to safety issues, particularly the risk of fire.

The threat of kitchen fires triples on Thanksgiving Day, according to the U.S. Consumer Product Safety Commission (CPSC), with an average of about 1,300 cooking fires on the fourth Thursday of each November.

“Unfortunately, many Thanksgiving holidays are ruined by accidents and injuries,” says Dr. Deshon Moore, emergency medicine physician at Advocate South Suburban Hospital in Hazel Crest, Ill. “We see it all the time. All the cooking and activity in and around the kitchen can add up to dangers you just don’t run into during the rest of the year, and people need to be extra careful.”

Between 2009 and 2013, the National Fire Protection Association (NFPA) reported that U.S. fire departments responded to an average of 162,400 home cooking fires per year. These fires resulted in an annual average of 5,400 reported injuries, 430 civilian fire deaths and $1.1 billion in direct property damage.

According to CPSC, the larger, non-confined Thanksgiving Day fires in residential buildings are generally caused by electrical malfunctions, carelessness or other unintentional actions such as open flames.

“People need to take some time to educate themselves on how to prevent fires and other potentially devastating mishaps,” says Dr. Moore. “They also need to be prepared to deal with anything that goes wrong before it turns into a much more serious safety issue.”

The NFPA recommends that if you have a small (grease) cooking fire on the stovetop and decide to fight the fire, you should smother the flames by sliding a lid over the pan and turning off the burner. Then, leave the pan covered until it is completely cooled.

To keep yourself and your loved ones safe this Thanksgiving, Dr. Moore recommends people follow guidelines set by both the CPSC and NFPA, including:

Turkey fryers are another popular way to cook Thanksgiving turkey, but the frying can add another level of safety issue to the holiday festivities.

According to CPSC reports, there have been more than 160 turkey fryer-related fires, burns, explosions or carbon monoxide poisoning incidents since 2002. There were more than 70 injuries reported, but no fatalities.

← Is there a drug that can prevent HIV?
Celebrate National Family Health History Day →