Home / Heart care / Resilience despite all odds: A decade of health problems

Resilience despite all odds: A decade of health problems 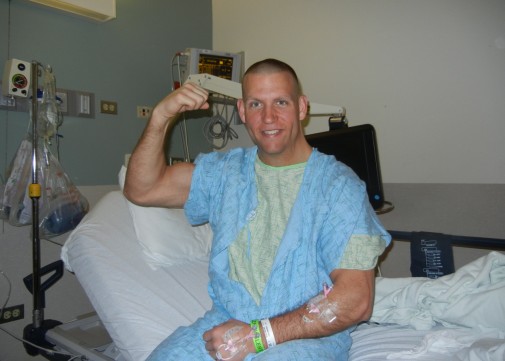 When we tackle obstacles, we find hidden reserves of courage and resilience we did not know we had. And it is only when we are faced with failure do we realize that these resources were always there within us. We only need to find them and move on with our lives,” -A. P. J. Abdul Kalam.

Rob Besecker is an adventurous man. By age 41, he’s climbed to the base camp of Mount Everest, traveled to all seven continents, visited all 30 Major League Baseball stadiums and is working on an inspirational memoir about his life.

Despite all the challenges he’s faced, the biggest one he’s ever had to endure was his health.

“When I was in my twenties I was healthy and fit,” says Besecker. “I was active in sports and loved trying new things. But I didn’t foresee the rollercoaster of health problems that almost had me at my death bed.”

In 2000, Besecker, who was 25 at the time, was diagnosed with atrial fibrillation, also known as AFib or AF. According to the American Heart Association (AHA), AFib is a quivering or irregular heartbeat (arrhythmia) that can lead to blood clots, stroke, heart failure and other heart-related complications. While this common type of abnormal heart rhythm can occur at any age, it is mostly diagnosed in people over the age of 65 years old.

A few years later, when the United States was embroiled in war in Afghanistan, Besecker felt overcome by a desire to fight for his country.

“I wanted to stop taking my heart medications so that I could get clearance to join the army,” says Besecker. “I had gone through several tests only to find how severe my heart condition really was.”

“To take that all in when you think you are perfectly fine and perfectly healthy was one of the toughest things I’ve gone through.”

What started as a physician visit and a relatively common diagnosis turned into a decade of health problems.

It turned out Besecker had to have several surgeries including an dual function Implantable Cardioverter Defibrillator (ICD) that helped keep maintain his heart rate so he wouldn’t go into sudden cardiac arrest and a pacemaker to help maintain his heart rate. An ICD is a battery-powered device that has thin wires that connect the device to a person’s heart, says the AHA. When the heart has an abnormal rhythm, the device will deliver an electric shock that helps to restore the person’s heartbeat back to normal.

A year after his father was diagnosed with muscular dystrophy, Besecker was also diagnosed with the same genetic disorder, characterized by progressive muscle degeneration, according to the Muscular Dystrophy Association.

The pinnacle of worry came in 2011, when his family, friends and physicians thought the end might be near.

“That year in particular, I endured 20 ICD shocks, five cardiac related surgeries, seven ER visits, six ambulance rides, five calls to 911 and a collapsed lung,” says Besecker. “But I wasn’t willing to give up. I had to stay forever strong.”

Dr. Thomas Bump, a cardiac electrophysiologist at Advocate Heart Institute at Christ Medical Center in Oak Lawn, Ill., is one of Besecker’s physicians and has seen just how strong he really is.

“I’ve known Rob for a long time and he’s an impressive guy,” says Dr. Bump. “He’s one of those people that despite everything that he’s gone through and the roadblocks that he’s had with his health, he doesn’t let anything stand in his way with the ambitious goals he wants to achieve in life.”

Currently Besecker is better than ever. He sees Dr. Bump about every three months to check-up on his defibrillator and to make sure that everything is running smoothly.

To learn more about Rob Besecker’s journey or to get a copy of his book “ForEver Strong” that will be released in the summer of 2016, please visit his website or Facebook page.

← Should men get annual physicals?
Beta-blockers may be key to slowing cancer progression →