Home / The Advocate Nurse / Having a premature baby in the NICU

Having a premature baby in the NICU 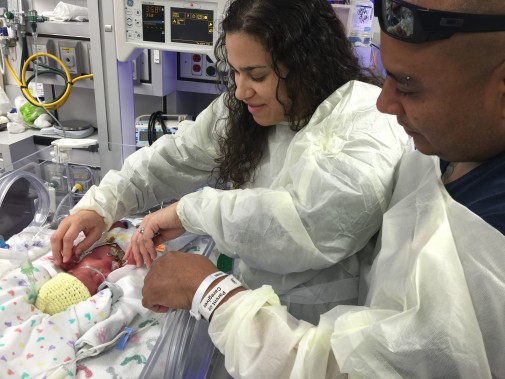 On April 27, 2015, after working a long 12-hour shift at Advocate Illinois Masonic Medical Center as Assistant Clinical Manager of the Mother-Baby Unit, I started feeling pain in my lower abdomen while I was picking my daughter up from my aunt’s house. Since I was 28 weeks pregnant, my aunt and cousin followed us home to make sure we got settled in okay. I will forever be grateful to them for making that decision, as all of a sudden the pain got worse and I knew my son was coming.

There was no time to get to the hospital, and I ran to the bathroom feeling like I needed to have a bowel movement. As my aunt dialed 911 and got in touch with my husband, my cousin, who is also a nurse, followed and tried to keep me from using the restroom. Instead, she found herself helping me give birth to my son Dominic.

The paramedics arrived and my husband asked them to take us to Advocate Illinois Masonic, the same hospital I had completed a shift at hours earlier. Dominic was born at 28 weeks weighing 3 pounds and 3 ounces. My doctors said I likely had an abruption (a complication of pregnancy during which the placental lining separates from the uterus) at home and Dominic might not have survived had I been alone.

When we got to the NICU, one of our primary nurses named MarieKris told my family that our upcoming journey would be a rollercoaster and we had to be prepared for both highs and lows. She also assured us that she would always advocate for what is best for Dominic and would be there every step of the way to guide us. I held onto those words and, boy, was she right!

There were many times I wasn’t sure I could make it through the experience emotionally. It took a while to sink in that I had given birth to a son very prematurely, and now he needed a tube down his throat just to breathe. I remember crying and wondering what I had done wrong, but the answer was nothing. I was receiving prenatal care and taking all steps possible to have a healthy, full-term baby. I’m thankful for that care and planning, as it made him that much stronger for all he had to endure.

One of the most challenging times was the day I was discharged from the hospital. I’ll never forget when my discharge nurse asked if I wanted to see Dominic in the NICU before I left, and it hit me again that my baby wasn’t coming home with me. Being a Mother-Baby nurse, I had asked parents that question many times, holding their hand while they prepared to leave their child. I always have compassion and sympathy for my patients and what they’re going through, but I never fully understood the flood of emotions that come with leaving your baby in the NICU until I was in the position myself. 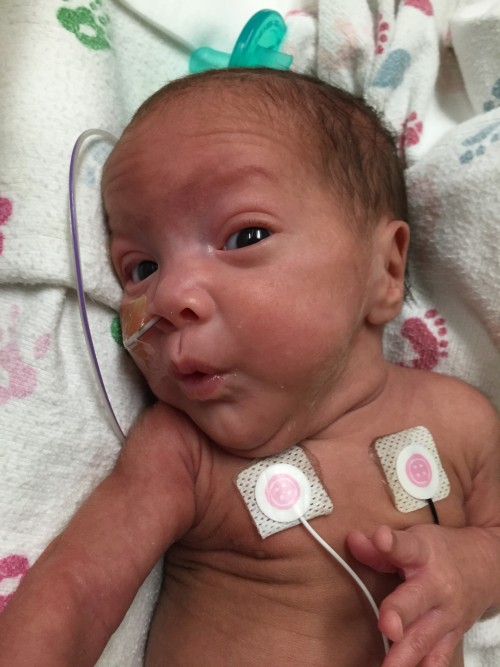 I was now the mom of a NICU baby, and the worry and panic began to kick in. I’m thankful for the Mother-Baby staff and manager Stefanie House for making me feel welcome to stay as long as I needed the day I was discharged. As challenging as it was to leave, my three-year-old daughter, Jade, was at home and also needed her mommy. My husband and I saw Dominic together before leaving the hospital and we both knew it was going to be rough. No one can prepare you for the stress of healing yourself, caring for your other child(ren) and visiting your newborn in the NICU. How do you juggle your daily routine when your baby is literally fighting to survive?

I tried to visit every day. My husband would go to the NICU after work in the middle of the night and spend time with him, but we had a breaking point. Exhaustion finally caught up to us. All the NICU nurses told us to focus on taking care of ourselves and they would make sure Dominic was safe. Cindy, the Assistant Clinical Manager in the NICU, told us it was okay to skip a day to rest and regroup. She even came up with the idea to use FaceTime! Dominic was first to test this out and it was amazing. I was able to use FaceTime from my iPhone to see him when I couldn’t be there and get updates from the nurses. It also gave my daughter, who couldn’t go into the NICU, a chance to see her brother. 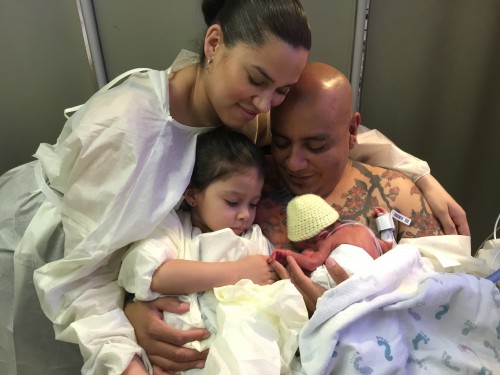 When Dominic was one month old, the NICU celebrated the milestone and one of our nurses, Nedy, made him a one month old sign and decorated it. It was at that moment I realized how far he had come. The best advice I can give is to listen to your NICU nurses when they tell you your baby is in good hands.

We were at the high point of the rollercoaster for a while. Dominic was improving with his oxygen needs, tolerating feedings and gaining weight. But then came the lows. Dominic had to be put on strict isolation and needed a blood transfusion. I sometimes found it difficult to make others understand that even though I understand medical terminology and procedures because of my job, I was a parent first and foremost and wanted everything explained to me. All of the NICU nurses and neonatologists kept us informed, and it’s true that you form a bond with them that can never be forgotten.

Discharge day from the NICU was bittersweet. Dominic had been in the NICU for just over eight weeks and the staff had become part of our family. Today, Dominic is happy and healthy at eleven months old and we continue to be grateful to all of the doctors, nurses, family and friends who’ve helped along the way.

Melissa is a leader on the Advocate Illinois Masonic Medical Center team supporting March for Babies, an annual March of Dimes event that raises funds to support programs that help moms have healthy, full-term pregnancies. To learn more or make a donation, visit our team page. 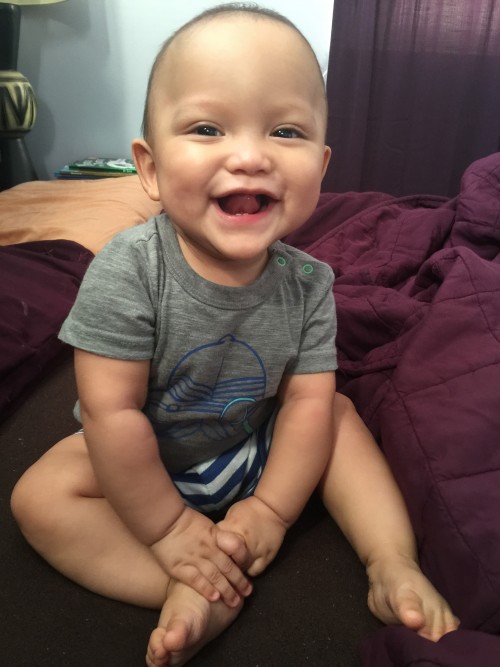 Melissa is a leader on the Advocate Illinois Masonic Medical Center team supporting March for Babies, an annual March of Dimes event that raises funds to support programs that help moms have healthy, full-term pregnancies.