Is one minute of (very intense) exercise enough? 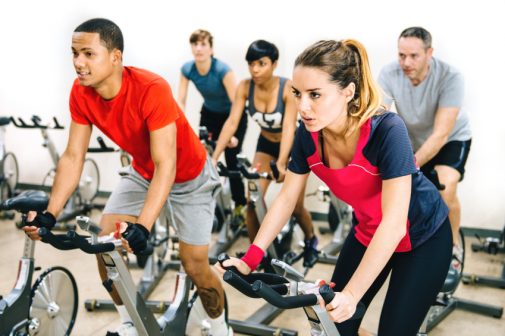 Are you one of the countless individuals who chalk up their lack of exercise to not having enough time in your schedule? You may need to find a new excuse.

According to a recent study, 60 seconds of strenuous exertion proved to be equally successful at improving participants’ overall health and fitness as 45 minutes of moderate exercise.

The study analyzed 25 out-of-shape young men, measuring their cardiovascular fitness as well as their body’s ability to regulate blood sugar levels. Participants’ muscles were biopsied to see how well they functioned on a cellular level.

The men were then divided into three groups—one non-exercising group, a second completing a standard endurance workout on a stationary bike for 45 minutes and the third group performing interval training.

The interval training group warmed up for two minutes, then pedaled as hard as they could for 20 seconds, then slowly for two minutes, sprinted all-out for 20 more seconds, recovered with slow riding for another two minutes, and pedaled hard again for a final 20 seconds before a three minute slow-riding cool down. The workout lasted for 10 minutes, but only one minute was strenuous.

Over the course of the 12-week study, the 45-minute endurance group rode for 27 hours, while the interval group rode six hours, with only 36 minutes of that time being strenuous.

The gains appeared to be virtually identical. For both groups, endurance increased by 20 percent, insulin resistance improved greatly and there was a large increase in the muscle number and function.

“This is an extremely interesting finding that will give credence to all the fans of High Interval Intensity Training (HIIT),” says Dr. Armand Krikorian, internal medicine residency program director at Advocate Christ Medical Center in Oak Lawn, Ill. “The words ‘high intensity’ are key, as we would not want to give the impression that one minute of regular training is enough. For those of us struggling to find time to go to the gym, those short bursts of activity will help keep us in shape.”

Dr. Vanessa Hagan, an internal medicine physician at Christ Medical Center, adds that not having the time to exercise is one of the main reasons people aren’t doing it.

“If they know that one minute of strenuous exercise could equal 45 minutes of exercise, it may get them moving, and at least attempting to exercise, even if they do just one, 10 or 45 minutes,” Dr. Hagan says.

“I would be a little apprehensive that people who aren’t used to exercising try to do too strenuous of exercise in a minute when they’re not used to exercising at all,” she cautions. “That could cause heart strain in someone with an unknown heart condition and could potentially be life-threatening.”

Both Dr. Krikorian and Dr. Hagan recommend consulting your physician before engaging in any form of regular exercise.