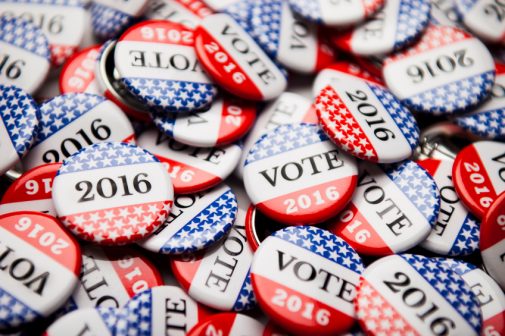 Every four years, when campaigning has ended and the last of the nasty commercials has aired, most people rejoice. But I mourn the passing of the U.S. contest for president. My name is Kathy Troher, and I am a politicaholic.

Like a smoker who already is reaching for a lighter as she wakes up in the morning, when my eyelids pop open, I’m grabbing the remote to flip through the cable news channels. My first lucid thoughts are these: Did I miss an early-morning tweet? What breaking campaign news broke while I slept?

I don’t know why. I mean, the idea of a campaign is to develop an opinion on who would be best to lead the country and, for all of us, create an environment for us to live our lives to the greatest potential. But for me, the race is my fix.

And especially this year, it’s like a car wreck on the interstate. I know I should avert my eyes and be on my way (nothing to see here), but I can’t. I need to know what’s happening.

That proved almost impossible this summer while my husband and I vacationed in Europe. CNN World was the best we could get on TV, and the minute-by-minute Clinton-Trump finger pointing only cracked their top stories every few hours. Instead, all we got there was Brexit, Brexit, Brexit on the British vote to exit the European Union. We were only overseas a week, but before returning home, David Cameron was out and Theresa May was in. Where were the months and months of scandal, conspiracy theories, pivoting? No wonder we formed our own country.

When we returned home, I can’t remember what came first: flipping on the lights, turning on the TV or going to the bathroom.

Do you wonder if you, too, have a “problem?” Here’s a quiz I developed that might help you decide whether it’s time for a 12-step program.

If you answered yes to any of these questions, it may be time for an intervention.

Actually, an intervention would be wise. Listening to all the negativity, shouting and name-calling can’t be good for your blood pressure. It gets mentally fatiguing after a while. At some point, your brain needs a rest.

I can see why mental health experts recommend turning the TV off when the networks are playing the latest tragedy on what seems like an endless loop. Emotional stress isn’t healthy. It’s OK to walk away.

The funny, or tragic, thing is, I think most people already know who they’ll vote for. So all of the discussion,  fretting and conjecture is next to pointless.

Why do we bother? We could wait until a month before the election to crank up the campaign. We might learn to do something constructive with our time. As for me, I could — I don’t know — learn to knit.

Oh, look at the time. I have to run. Where’s the remote? WHERE’S THE REMOTE?

← Blog: Discovering art therapy, the silver lining
When should you toss your food? →