Double-dipping: A recipe for disaster? 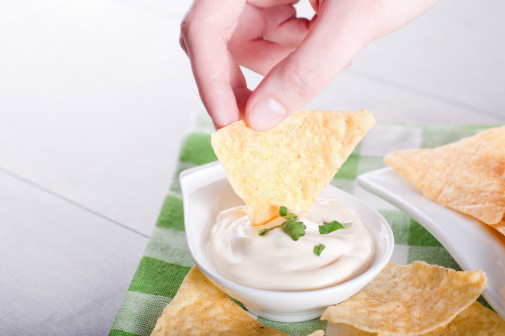 Watch out for double dippers.

A study found that someone who dips an item into a communal bowl, takes a bite and then dips again can easily transfer bacteria from his or her mouth into the dipping bowl, potentially spreading illness-causing germs.

Salsa, chocolate syrup and cheese dip were subjected to numerous tests by researchers from Clemson University. In the absence of double-dipping, there were no detectable bacteria present in the samples. Once subjected to double-dipping, all the dips took on measurable amounts of bacteria.

Partly because it’s not as thick as chocolate or cheese, salsa took on about five times more bacteria than the other dips. However, after two hours, the bacterial population of the salsa decreased to about the same levels as the chocolate and cheese.

Not all bacteria is bad, but many serious diseases, including pneumonic plague, tuberculosis, influenza virus, Legionnaires’ disease and severe acute respiratory syndrome (SARS), are known to spread through saliva. In short, double-dipping can be a recipe for disaster.

“Hand-to-food contact is one of the most common ways to spread illnesses, studies have shown, so whether it’s double-dipping or communal eating from bowls of nuts, it’s best if a spoon is included in each bowl and small plates are provided so each individual can take what they want and keep their germs to themselves,” says Cari Coomer, manager of infection prevention at Advocate Good Samaritan Hospital in Downers Grove, Ill.

To prevent the spread of foodborne diseases, experts say the best defense is a good offense. Try to get to the dip when it’s served before other partygoers dive into it. Also, use a utensil to place snacks on your own personal plate and get a new plate if you return for seconds.

“If you detect double-dippers in the midst of a festive gathering, you might want to steer clear of their favored snack,” Clemson researcher Paul Dawson, a professor of food science, said in a news release. “And if you yourself are sick, do the rest of us a favor and don’t double-dip.”