The eating disorder you may have and not even realize 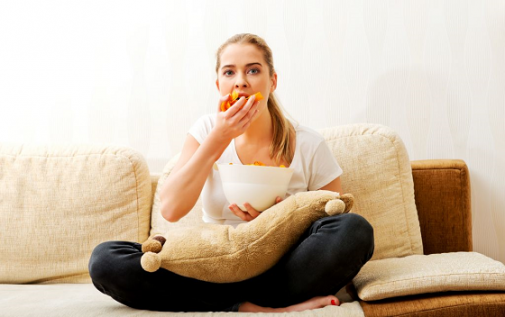 It’s Friday night, and you’ve had a long, stressful week. You order a large pizza for one and take out a sleeve of thin mints from the freezer while binge-watching your favorite Netflix show.

Afterwards, you feel terrible for consuming such large quantities of food in one evening. The thought crosses your mind- is this normal, or could you suffer from binge eating disorder?

Binge eating disorder (BED) is the most common eating disorder in the United States, according to the National Eating Disorders Association. The condition is severe and life-threatening, but it is treatable. Those who suffer from this disorder eat large quantities of food very quickly and to the point of discomfort. During the binge, they feel a loss of control, shame and guilt afterwards. It is important to note that binge eating disorder does not include purging, such as bulimia.

“Patients who are diagnosed with binge eating disorder often describe the episode as eating more rapidly than normal and being in a ‘zone’ that’s very difficult to interrupt,” says Sarah Katula, advanced practice nurse in psychiatry at Advocate Good Samaritan Hospital in Downers Grove, Ill. “They will often binge and then say to themselves ‘I’ll be good tomorrow,’ or ‘I’ll restrict tomorrow,’ and the cycle is set up to repeat itself. These patients often have a very poor relationship with their own bodies and with food.”

“There are a lot of reasons why someone could develop the disorder from depression and low self-esteem to biological abnormalities such as a hormonal irregularity or genetic mutation that is associated with compulsive eating. Those who have a previous history of a different eating disorder, such as anorexia, could be susceptible to developing the disorder as well,” she says.

Katula suggests answering the following questions to determine if you have binge eating disorder:

If you answered yes to three of those questions and binge at least once a week for three months, Katula suggests seeking help from a mental health professional who has training in eating disorders. The professional can properly diagnose the disorder and offer therapy and even medication as a form of treatment.