Miss Illinois Plus competition winner, hospital worker, is anything but average 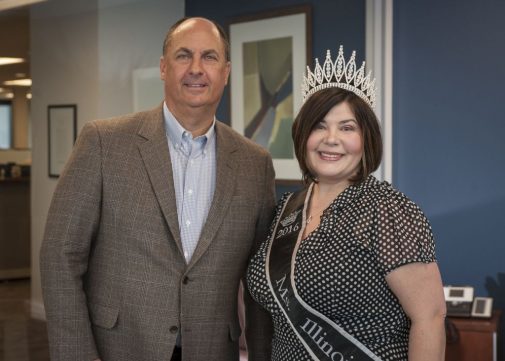 In April 2016, Wendy Roach did something unexpected. She competed in the Miss Illinois Plus America competition, and she surprised herself by winning. Roach, director of patient access at Advocate Good Shepherd Hospital in Barrington, Ill., used her year-long reign to raise awareness about pulmonary fibrosis and to advance the importance of having a positive body image. Here’s what Roach had to say about both.

How did you find out about Miss Illinois Plus America?

I was stuck on that same hamster wheel of working, going home, sleeping and going back to work. There wasn’t much variation in my life, so I was looking for something. I wanted to do something for myself.

As a kid, I always watched Miss America and Miss U.S.A. on TV. I dreamed of participating, but I knew it wasn’t for me because those women weren’t my size. So last year, as I was looking for something to do for me, I googled plus-sized pageants. This popped up, and it turns out it’s the largest one of its kind. I thought, “I’ll apply and see what happens.” That was in March, and I got accepted. The pageant was in April, and I won. I was excited but kind of anxious. I thought, “Oh, my gosh, what did I get myself into?”

What was the pageant like, and what happened next?

The competition included interview, elegant pant wear, evening gown and an onstage question. Each contestant is required to be a size 14W and up. Because it’s a platform-based pageant that promotes service, every competitor has to have a platform that they work with and are passionate about. The pageant is part of the Miss Plus America Pageant, which is the premier pageant for plus-size women in the United States. On July 2, I competed for the title of Miss Plus America in Dallas, Texas. I had a wonderful time and met other incredible women. We really formed a sisterhood.

Your platform has a very personal significance. Can you tell us about it?

My father passed away from pulmonary fibrosis the day before Valentine’s Day in 2013. I wanted to raise awareness about the disease, and I wanted to understand more about it myself. I had a really hard time with my dad’s death and found it difficult to understand the limited options for treatment. Learning and talking about the disease helped me to not have so much anger and frustration about it.

During the last year, I’ve helped educate other people about the disease. I’ve spoken with families who have or have lost a loved one with pulmonary fibrosis and brought comfort to them by sharing my story about what happened during my dad’s illness. It’s been very therapeutic for me.

What do you want people to know about pulmonary fibrosis?

PF is a disease in which lung tissue is scarred and damaged. This scarred tissue makes breathing difficult and limits oxygen getting into the blood. Most often, physicians can’t determine the cause of a patient’s pulmonary fibrosis. It is then called idiopathic pulmonary fibrosis; this is what my father had. There are a few instances where physicians can determine a cause. Generally, PF is then related to occupational or environmental exposure, genetic disease, autoimmune diseases or drug induced/medication exposure.

A recent study estimated that one out of every 200 people in the United States over the age of 65 is diagnosed with PF. The life expectancy is about five years from the time of acquiring the illness. Unfortunately, patients don’t get diagnosed with PF until the illness has progressed. Patients are offered palliative care for their symptoms because lung transplant is the only option for cure. Patients that opt for a lung transplant are usually placed on a transplant list with other patients with lung diseases. Because of the lengthy wait, patients often die before receiving a transplant.

You were required to make a minimum of one public appearance per month. Being the over-achiever that you are, you pushed yourself to do two each month. Among the groups you spoke to were high school students with body image issues. Can you tell us about that?

You know, the average American woman is a size 14. But when you look at models, they are size 0, 2, 4. Do they represent most women? As a society, what are we telling our children if that’s what we value? So when I talked to these high school girls, I talked about being happy with who you are in the size you are. It’s OK that you’re not a size 2.What’s important is feeling good about yourself and being the best person that you can be.

What did you learn about yourself during the last year?

I learned that there was still more confidence to be found in myself. Previously, I was always self-conscious and would get very nervous about being in front of people. It has been through this experience that I have become more self-assured with large groups of people.

We heard you were in Dallas recently where you received an award and spoke effortlessly before a group of more than 800 people. Can you tell us about the award and whether pre-pageant Wendy could have spoken in front of a crowd that size?

Yes, I was at the National Association of Healthcare Access Management national conference where I presented to healthcare access leaders and received the Doris E. Gleason Publication Award for an article that I wrote for the journal. I feel so blessed. Pre-pageant Wendy would have been sick to her stomach about a crowd that size; I would have gotten in front of them to speak, but it wouldn’t have been easy for me. This time, I wasn’t so nervous. I was excited to be able to reach out to so many people. 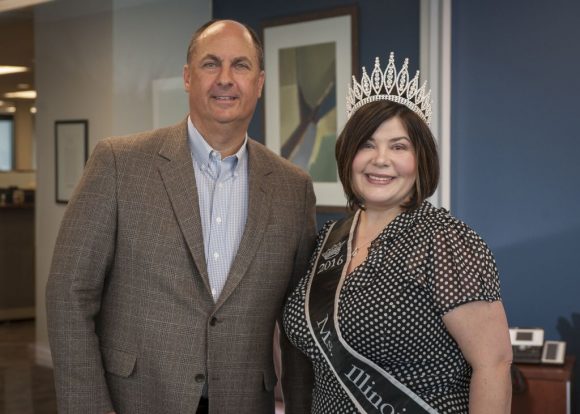 Wendy Roach, winner of the Miss Illinois Plus competition and director of patient access at Advocate Good Shepherd Hospital in Barrington, poses with Advocate President and CEO Jim Skogsbergh.

← 4 tips for the table
Ease cancer symptoms with these activities? →