Home / Behavioral health / Is it normal to cry while watching TV?

Is it normal to cry while watching TV? 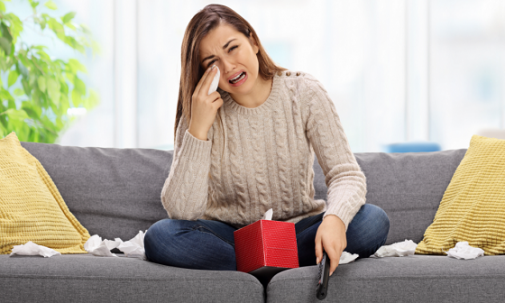 It’s happened to nearly all of us, whether we admit it or not. Ross finally kisses Rachel, Dorothy says goodbye to the Scarecrow, that one guy dies in the Guardians of the Galaxy sequel – and suddenly, you find yourself a bit teary-eyed, if not openly bawling.

You don’t know these people – they’re not even real – but movie and TV characters have a way of hitting a soft spot in most of us. Researchers say we form a parasocial, or one-directional, relationship with these characters. We know them and often think of them as friends, but they don’t know us.

So why do they have the power to make us cry? Crying during a movie or TV show can actually be good for you, experts say.

“There is research that analyzed the chemical make-up of emotional tears and compared them to the chemical make-up of other kinds of tears – such as tears from cutting an onion,” says Dr. Judy Ronan Woodburn, an Advocate Medical Group clinical psychologist in Bloomington, Ill. “The finding was that the emotional tears contained more toxins in them than ‘non-emotional’ tears. So, a good emotional cry really is cathartic, emotionally and physically.”

While there’s nothing wrong with crying along with our fictional friends, you may want to avoid becoming too emotionally invested in a movie or TV character.

Becoming too upset about a fictional movie or TV show can cause distress in your real life, which means you are probably too invested and it may be time to take a step back.