Going from a heart attack to getting back to mountain biking 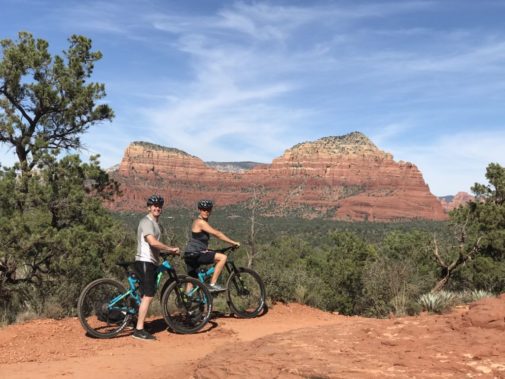 Charles Schuyler was an avid athlete who worked out regularly, so at age 54, he didn’t think he was at risk for having a heart attack.

But as he was going about his routine of lifting weights one day, he started to feel a weird sensation throughout his chest. He assumed it may just be a pulled muscle. While the sensation continued, he started to feel other symptoms such as heavy perspiring and a weird taste in his mouth.

It was then that Schuyler realized he was having a heart attack. He was taken quickly to Aurora St. Luke’s Medical Center in Milwaukee, which he requested because of its strong history in heart care.

“When a person is having a heart attack, time is of the essence,” says Dr. Tanvir Bajwa, an interventional cardiologist at St. Luke’s. “The quicker you intervene and open the blocked artery, the more muscle you save. Hence the phrase ‘time is muscle.’ Our cardiologist and cardiac cath lab team on campus leads fastest times in the state of Wisconsin and nationwide.”

“Doctors and nurses were lined up at the door waiting for me,” Schuyler said. “It was unbelievable.”

“The nationally accepted goal for treatment is 90 minutes,” Koblosky says. “Our team consistently treats patients in less than 50 minutes and has opened heart blockages in as few as 13 minutes after patient arrival.”

Since surgery, Schuyler is back to doing what he loves and is spreading the word about the importance of getting your heart checked. “Since my procedure I have been mountain biking, water skiing, hiking and running again. I have made it my job to tell my family and friends to get checked out because it’s just not worth it.”

Want to learn more about your risk for heart disease? Take a free online quiz.

← This is who is even more stressed out lately
This is why the U.S. recorded its biggest-ever decrease in cancer deaths →

Megan O’Dwyer, health enews contributor, is a public affairs specialist on the integrated marketing team at Advocate Aurora Health in Downers Grove. She earned a Bachelor’s degree in advertising from Iowa State with a minor in event management. In her free time, Megan enjoys traveling, cooking the latest recipes and cheering on the Chicago Cubs.