Home / Trauma care / Do you get frequent bloody noses?

Do you get frequent bloody noses? 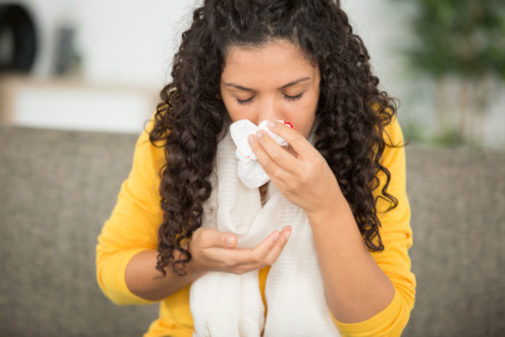 Bloody noses can be alarming, especially if they happen often. Depending on the frequency and severity, you may be left wondering if you should see a doctor for nosebleeds.

“Your nose has a lot of blood vessels, and nosebleeds are very common,” explains Dr. Anthony Lazaro, family medicine physician at Aurora Health Center in Plymouth. “Nosebleeds can have many different causes, such as dry air, light trauma to the nose, and, especially in children, nose picking.”

Upon getting a bloody nose, Dr. Lazaro first recommends blowing your nose to get rid of any clots that may have formed. This could increase bleeding only momentarily but should then slow down.

To try to stop the nosebleed, sit or stand bending forward slightly at the waist. Grip the soft part of the nostrils at the bottom of the nose, not the bridge. Squeeze your nose for at least ten minutes consecutively without stopping. If the bleeding has not stopped, try spraying a nasal decongestant spray twice in each nostril. Squeeze your nose for another ten minutes and, if still bleeding, seek emergency medical care.

Bloody noses can be dangerous if you lose too much blood. If you are on certain medications, like a blood thinner, this can make it harder to stop the bleeding.

“If you are having massive bleeding from a bloody nose, or bleeding so much that it is hard to breathe, seek emergency care,” says Dr. Lazaro. “Especially after a recent nasal surgery, if you are pale, fatigued, disoriented, or having chest pains, it is important to go to an emergency department.”

Recurring nosebleeds on one side can mean that the blood vessels are very sensitive. If you frequently have mild nosebleeds, an ear, nose, and throat specialist can cauterize these blood vessels in your nose to prevent future ones.

There are a few other preventative steps, such as using a saline nose spray, applying petroleum jelly to the inside of your nose, and using a humidifier when sleeping.

← A little green can go a long way
Do you know the signs of a brain tumor? →

“Hannah Koerner is a Public Affairs Specialist with Advocate Aurora Health. She received her Bachelor of Arts in Communication from the University of Wisconsin – Green Bay. In her free time, she enjoys biking, snowshoeing, and cheering on Wisconsin sports teams.”