Dr. John Lanciloti received his undergraduate degree in 1992 from Knox College in Galesburg, Ill. and his medical degree from Rush University in Chicago in 1997. He was trained in Family Medicine at Broadlawns Medical Center in Des Moines, Iowa and subsequently practiced traditional Family Medicine in Moline, Ill. from 2000 through 2009. In 2010, he moved to Roselle, Ill. and now practices exclusively as the Assistant Medical Director in the three Advocate Sherman Hospital immediate cares located in Algonquin, Elgin and South Elgin.

This author has already written 1 Articles 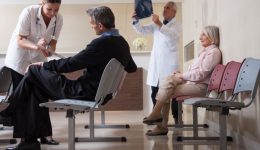 How this health care trend is saving you money
Tags: Advocate Sherman Hospital, Dr. John Lanciloti
It’s estimated that about 10,000 baby boomers will retire each day over the next two decades. What does that mean for you?