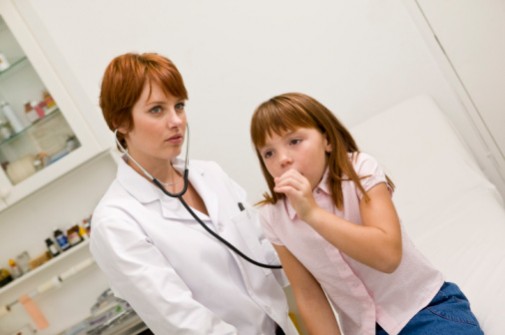 Our 9-year old daughter developed a cough last fall, shortly after she attended a birthday party at an indoor water park. We didn’t think it unusual, given her involvement in sports, dance and general life among a cute, but germy population.

Until the convulsive coughing fits started. And the vomiting. And an unmistakable, gut-wrenching sound of her gasping in for air. (Not to ruin the punch line here, but that sound is what puts the “whoop” in whooping cough.)

In one 24-hour period, she vomited 23 times from coughing fits so severe that she couldn’t breathe for an alarming period of time. Eyes bugged out, face red and then blue. The doctor confirmed it: She had pertussis, commonly called whooping cough.

And yet she had been vaccinated for whooping cough per the recommended schedule: five doses of diphtheria, tetanus and pertussis (DTaP), one dose at each of the following ages: 2, 4 and 6 months; between 15 and 18 months; and a final does when a child is between 4 and 6.

That same week, however, the New England Journal of Medicine released a report on whooping cough that concluded, “Protection against pertussis waned during the five years after the fifth dose of DTaP [diphtheria, tetanus, and acellular pertussis].”

The explanation was of little consolation, at that point, however. Our daughter wasn’t contagious because she’d been given an antibiotic early on, but that hardly mattered. Her life became a heightened awareness of the nearest bathroom, in case a coughing fit started. It was a constant terror of the next tickle in her chest that might signal a fit.

Coughing fits for weeks in the middle of the night while she slept, sometimes ending in vomiting. She was quarantined by the coughing itself. No school for a good two weeks—not because she was contagious, but because the fits were so severe. No soccer, dance or other activities until we were sure she wouldn’t have a coughing/vomit fit. The persistence of the cough (also known as the “100-day cough,” for obvious, horrific reasons) was truly impressive. We noticed a slight improvement in the frequency of her coughing fits by week 9, but progress is slow. She continues to wake up once a night coughing, a full three months after it initially started.

Unfortunately, there is little you can do, outside of following the recommended vaccine schedule, to curb the chances that your child gets whooping cough. As it turns out, you may just need to be a bit lucky. And probably best to steer clear of indoor water parks.