Home / Diet & Nutrition / Caffeine: How much is too much?

Caffeine: How much is too much? 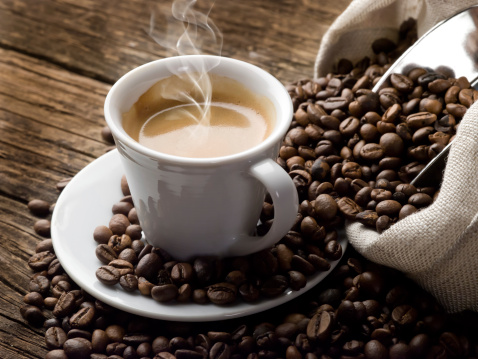 Recent research presented at a digestive disease conference in Orlando, Fl., shows that coffee consumption can correlate with lower risk for a particular autoimmune liver disease.

Researchers at the Mayo Clinic found coffee consumption linked to a reduced risk of a condition called primary sclerosing cholangitis (PSC), a bile duct disease that ultimately can lead to cirrhosis of the liver, liver failure and biliary cancer, which recently claimed the life of Doors keyboardist Ray Manzarek.

In light of this new research, however, is it possible to have too much caffeine?

“Caffeine intake recommendations can be difficult to make because everyone is different,” says Mary Carroll, a Registered Dietitian and Certified Diabetes Educator at Advocate Condell Medical Center in Libertyville, IL. “For example, teens need as much sleep as young children—sometimes more than 9 hours a night—and they may not get that if they’re consuming caffeine. This can lead to insomnia, erratic energy levels, mood swings, and having trouble staying awake at school or even while driving.”

This isn’t good news, as a 2010 study found that children between the ages of 8 and 12 were consuming an average of 109 mg of caffeine per day. The American College of Medical Toxicology reports that popular energy drinks are regularly consumed by 31% of 12- to 17-year-olds and 34% of 18- to 24-year-olds.

As for adults, Carroll recommends that “you should limit your caffeine intake to 200-300 mg per day, which is about 2-4 8-oz cups. Everyone is different, though. People who are taking certain medications or have high blood pressure or other heart problems should consult their physicians because caffeine can exacerbate some of these conditions.”

Dr. Bruce Hyman, an internal medicine physician at Advocate Condell concurs. “As with anything, a common sense approach is best. Caffeine is still a drug and patients and parents have tune in to the amount in their diet. In high doses it could contribute to heart rhythm problems. It could also lead to some hyperactivity in kids. In adults it can cause diuretic like issues.”

Carroll says that heavy caffeine use is 500 to 600 mg per day, which can cause a myriad of side effects, including:

Finally, Carroll adds, “What a lot of my patients don’t realize is that people who consume too much caffeine also tend to take in more food throughout the day because when the caffeine effects wear off, their body is looking to keep its energy levels up—which means they eat more food.”

To help combat this negative effect, Carroll recommends that if you need some caffeine in the morning, you cut yourself off by noon. Which Americans know is easier said than done.

← Is your sunscreen really protecting you?
Pediatric Disaster Drills →