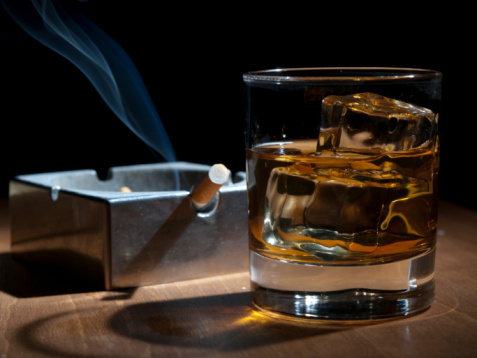 Heavy drinking and smoking are two known health threats. Now, experts say, combining them can lead to damaging effects on the brain.

Results of a new study published in the British Journal of Psychiatry show that smokers who also drink heavily had a 36 percent faster cognitive decline as compared to their non-smoking, moderate-drinking counterparts.

Study leaders said the combination of the two habits is where the danger lies. The combined effect of smoking and drinking together “may be larger than the sum of their individual effects.”

“Current advice is that smokers should stop or cut down, and people should avoid heavy alcohol drinking,” said study leader Dr. Gareth Hagger-Johnson, in a news release. “Our study suggests that people should also be advised not to combine these two unhealthy behaviors – particularly from midlife onwards. Healthy behaviors in midlife may prevent cognitive decline into early old age.”

Researchers studied 4,600 men and 1,800 women between 45 and 69 years old, over a decade. The participants were surveyed about their smoking and drinking habits. During the study period, the participant’s verbal, mathematical reasoning and short-term memory were also assessed three times during the 10-year period.

The results indicate that the heavy drinker/smokers showed a faster mental decline adding years to their age.

“When we looked at people who were heavy-drinking smokers, we found that for every 10 years that they aged, their brains aged the equivalent of 12 years,” Dr. Hagger-Johnson said.