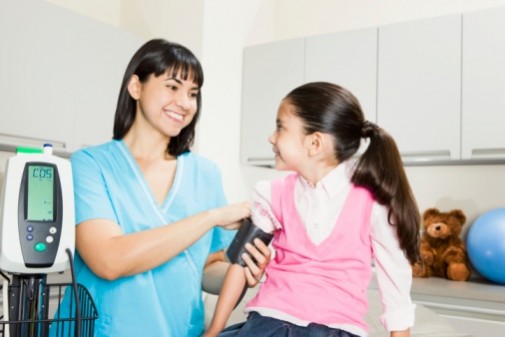 But a new study published in the American Heart Association journal Hypertension online this month revealed that now America’s children and adolescents are at risk for elevated blood pressure. In fact, the risk rose 27 percent during a 13-year period, according to the research.

The probable cause? An increasing number of kids have higher body mass, larger waistlines and are consuming too much sodium, researchers said.

“High blood pressure is dangerous in part because many people don’t know they have it,” said Bernard Rosner, lead study author, in a statement. “It’s a very sneaky thing. Blood pressure has to be measured regularly to keep on top of it,” added Rosner, a professor of medicine at Harvard Medical School in Boston.

Researchers surveyed more than 3,200 children between the ages of 8 and 17 from 1988 to 1994 and compared these findings with more than 8,300 children surveyed from 1999 to 2008. Researchers accounted for differences between the two groups in age, sex, race/ethnicity, body mass, waistline and sodium intake.

Although researchers noted “elevated” readings, the children could not be labeled hypertensive because an official diagnosis comes after high blood pressure readings three times in a row.

The research revealed some key findings:

In terms of daily sodium intake, more than 80 percent of participants in both studies had above 2,300 milligrams, however, in the later study, fewer participants had an intake above 3,450 milligrams.

On average, Americans eat an average of 3,400 milligrams of sodium daily, which is more than twice the 1,500 or less recommended by the American Heart Association. Two-thirds of sodium intake is from store-bought foods and one-quarter from restaurants.

“Everyone expects sodium intake will continue to go up,” Rosner said. “It seems there’s been a little bit of listening to dietary recommendations, but not a lot.”

Studies have linked excessive sodium in the diet to high blood pressure, and have suggested that reducing sodium intake in children and adolescents can lower the average systolic (top number) blood pressure by 1.2 mm Hg and average diastolic number (bottom number) pressure by 1.3 mm Hg.

← Postponing retirement may delay dementia
Does everyone need to be screened for glaucoma? →