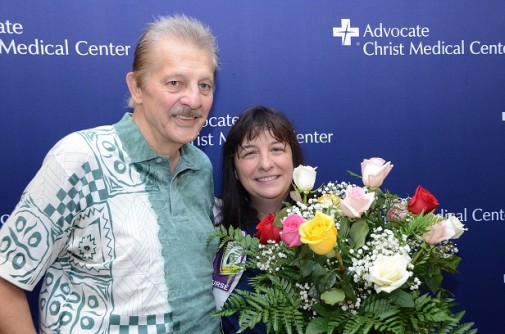 Gerald “Jack” Boekeloo’s amazing story is like something out of a fairy tale, complete with a distressed victim, a modest heroine and even a white castle, so to speak.

Boekeloo, now 70, a retired army specialist and machinist, suffered a massive heart attack in November 2011 while driving. His vehicle careened into a parked car near the White Castle at 95th Street and Cicero Avenue in Oak Lawn, Ill.

Boekeloo almost died at the scene until an unknown heroine immediately administered cardiopulmonary resuscitation (CPR). When the ambulance arrived, she left the scene without being identified and launched the mystery of who saved Gerald Boekeloo’s life.

“If it weren’t for the Good Samaritan who acted swiftly and correctly administered CPR, Gerald would not have made it,” says Dr. Thomas Levin, cardiologist with Advocate Medical Group and Advocate Christ Medical Center in Oak Lawn.  “Although he ‘died’ again upon arriving at Christ, I believe the initial and quick administration of CPR made it possible for his lungs to revive again.”

In February 2012, Boekeloo had a ventricular assist device (VAD) implanted to support his weak heart and, ever since, has been recuperating and growing stronger. But the magic doesn’t stop there.

Unexpected reunion
That July, nurses Dawn Bausone-Gazda and Cheryl Wilson worked together during a busy shift. Like any hectic time, nurses will tend to patients other than their own. Bausone-Gazda assisted taking care of one of Wilson’s patients, Gerald Boekeloo. Bausone-Garza recalled him talking about a person who gave him CPR the day of his accident, and she realized the woman in the story was her. After telling Wilson about this fateful conversation, she decided to reveal her identity to Boekeloo, but not then. The fairy godmothers at Christ Medical Center worked their magic to coordinate a reunion that no one could forget.

Boekeloo finally met his guardian angel in front of a crowd of more than 200 people during a news conference at Christ Medical Center. Boekeloo and Bausone-Gazda had a tearful embrace that started a beautiful friendship.

Jack reunites with the nurse who saved his life.

New chapter begins
After receiving his VAD, Boekeloo underwent continuous treatment for his heart condition while waiting for a heart transplant. Boekeloo, Wilson and Bausone-Gazda have since become family, calling him their “Uncle Jack.”

The doctors at Christ Medical Center made sure this bond would last longer than anyone thought. On April 13, 2013, Boekeloo underwent his heart transplant.

“The heart is a scarce resource,” says Dr. William Cotts, cardiologist at Christ Medical Center. “To get to this point, it takes a lot of work. Granted, he’s been through a lot along the way.”

Boekeloo received a new heart and began a new chapter of his life right as he turned 70.

“I feel great,” said Boekeloo before his discharge. “I wish everybody had this feeling.”

Bausone-Gazda and Wilson cared for Boekeloo after his transplant, and his discharge day was bittersweet. Without a dry eye in the room, Boekeloo expressed gratitude and comfort to his lifesaver.

The fairy tale came true in a way no one expected. Bausone-Gazda and Boekeloo will forever have an irreplaceable bond that will last longer than the stroke of midnight.