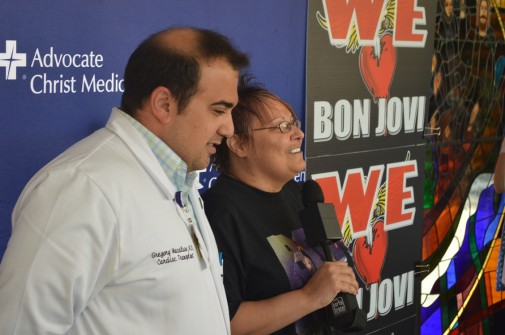 Heather Royhl nearly died three times, but refused to give up.

In February 2013, Royhl, a 41-year-old woman from Chicago, came to Christ Medical Center in cardiogenic shock, which means her heart was unable to pump enough blood to her organs. She required treatment due to an infected heart muscle that was restricting blood flow in her body caused by viral cardiomyopathy. Her cardiology team also discovered that she has a rare blood-clotting condition, which presented a myriad of other obstacles for her to overcome.

“She had everything,” says Dr. Gregory Macaluso, cardiologist on the heart transplant team at Christ Medical Center. “Her clotting condition eventually led to a stroke, which resulted in kidney failure and a respiratory infection. She definitely required an unconventional treatment plan, but Heather would not give up.”

Eventually, Royhl received a temporary heart pump, which put her back on the road to recovery. Her aggressive rehabilitation sessions spanned a period of more than three months. Doctors were amazed. Royhl’s condition eventually landed her on the heart transplant list.

On July 5, Royhl received her new heart. She was given a new chance at life, and wanted to celebrate. She had previously purchased tickets for the Bon Jovi concert at Soldier Field on July 12. Her goal was to be discharged one week after her transplant to attend her all-time favorite band’s concert.

“I understand that receiving a new heart is good reason to miss the concert this year, but I’m upset about it. I’ve attended all of their past concerts in Chicago, and I’m already making plans on going next year,” Royhl says.

Royhl missed the concert, but in keeping with her can-do spirit, she did not give up hope that Jon Bon Jovi and his band would keep her in their hearts as she lay in a hospital bed with an unused ticket to his concert.

And of course, Jon Bon Jovi rolled out the royal, get-well treatment for Royhl, by sending her a special delivery package –a one-of-a-kind, 6-foot poster, signed, “Heather, sorry we missed you! See you next time!”

Royhl’s care team gathered to celebrate Bon Jovi’s generosity and the outstanding recovery she continues to make. While reflecting on her journey the past five months, everyone knew they witnessed a miracle. The die-hard fan received a new chance at life and looks forward to attending many concerts to come.

← Recovering from an ACL injury
Cash for weight loss can work →