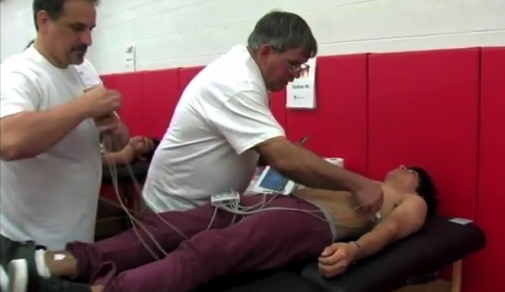 What began as one doctor’s grassroot attempt to help save the lives of young athletes has now blossomed into the largest heart screening program in the country.

Young Hearts for Life (YH4L) was founded by a Chicago cardiologist, Dr. Joseph Marek, in 2006 after he was moved by the deaths of two young people from sudden cardiac death in his community. The unique program is run by physicians, parents and community volunteers who are trained to test school-aged children for possible deadly heart conditions. And this month the group will perform its 100,000th ECG. The special milestone is happening at Lombard’s Montini Catholic High School.

“We never set out to be the biggest—we just wanted to make a difference in the lives of young people,” said Dr. Marek, a clinical cardiologist with Advocate Medical Group in Downers Grove, Ill., and founder of the YH4L program. “The amazing growth comes because of the energy and commitment of our thousands of volunteers whose only goal is to save lives.”

Sixty-five students at a suburban middle school were given electrocardiograms (ECG) in the pilot program. Since then, more than 12,000 community volunteers have been trained to do the screenings. If a problem is detected in the screening, parents are urged to see a physician of their choice for follow up and treatment.

An ECG can detect hypertrophic cardiomyopathy, a genetic condition characterized by abnormal thickening of the heart muscle. It is one of the most common causes of sudden cardiac death in young people. The test can also spot other life threatening cardiac conditions such as WPW and Long QT syndrome.

Dr. Marek says the program has saved the lives of hundreds of student athletes who were unaware of their life-threatening heart conditions and may have gone unnoticed and untreated.

Sharon Smith, a parent and YH4L volunteer, says the program can bring peace of mind to parents.

“This should be looked at like prostate, mammogram or colon cancer screenings,” Smith says. “If you know what you’re dealing with, you know what to do next. I believe if you can save one kid’s life, it’s worth it.”

Looking to the future, Dr. Marek, along with fellow cardiologists, Dr. Ziad Sinno and Dr. Frank Zimmerman, are exploring opportunities to expand the program into colleges, sports clubs and even equipping physician offices with the needed equipment.

“We really want to make this convenient for everyone,” Dr. Marek says. “With technology the way it is now, it’s becoming easier to share information digitally. We’d love for primary care offices to be able to perform the tests and then shoot the results wirelessly to cardiologists for reading.”

In late February, YH4L will partner with the Chicago Bulls during a screening at Maine West High School in Des Plaines. Benny the Bull and a number of Bulls players will be on hand as hundreds of young athletes undergo screenings.