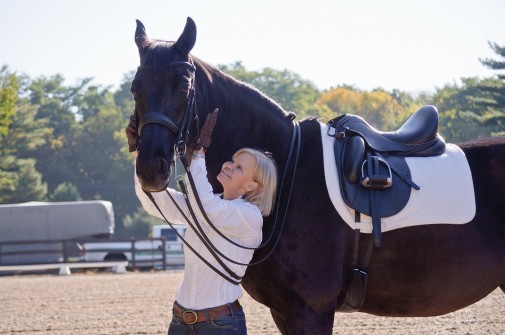 As an international dressage equestrian competitor, Adrienne Pot has been a professional athlete for many years. In fact, she is ranked 17th in the nation and has participated in numerous competitions around the globe.

“Dressage riding is essentially gymnastics for the horse and rider in which the two move as one using complex movements,” Pot says. “It’s both a physically and mentally demanding sport that requires years of training and practice.”

However, two years ago, the now 58-year-old from Barrington Hills, Ill. was experiencing significant hip pain that began to interfere with her ability to compete.

After other treatment options such as cortisone injections and anti-inflammatory medications failed to relieve the pain, Pot finally decided to undergo anterior hip replacement surgery in July 2013.

Hip surgery began in the 1960s and is one of the most successful operations in medicine, according to the American Academy of Orthopaedic Surgeons. More than 285,000 total hip replacements are performed each year in the United States.

“With the anterior approach, I don’t detach any muscles so the hip is immediately stable from the time of surgery,” Dr. Palmer says. “Adrienne was back to riding her horse at a high level just eight weeks after surgery, which is truly remarkable after a hip replacement. If she would have had the more invasive posterior approach, her recovery time would have been about six months. The anterior approach is my preference for when I perform a hip replacement because of the many benefits for patients.”

health enews chatted with Pot about her experience and life after hip replacement surgery:

Why did you make the decision to have hip replacement surgery?
I’m a professional athlete, so I’m used to feeling sore and working through the pain. However, my hip pain was extremely painful and caused me to have difficulty walking. I’m a very active person, but over the past year, all I wanted to do was sit down due to the pain.

How has your life improved after hip replacement surgery?
With my new hip, I feel like I did five years ago. I’m currently training for a winter competition in Florida and continue to get stronger each day. I’m back to my active lifestyle of riding horses multiple times a day and taking part in other recreational activities.