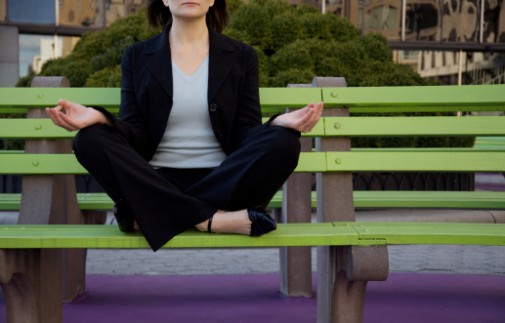 Did you know? Eighty percent of Americans are stressed out by their jobs, according to a recent survey by Everest College. The survey also showed a 10 percent increase from the previous year.

A spokesperson for the survey said that a troubled economy has brought on budget cuts, layoffs and longer hours. All these factors can lead to poor compensation, an overwhelming workload and a struggle to find work-life balance, experts say.

With so many employed Americans stressed out, is there anything they can do to relieve their anxiety?

A recent, small study found that regular doses of meditation might prevent work-related stress and burnout. The study, published in the Permanente Journal, examined teachers and support staff working at a therapeutic school for students with severe behavioral problems.

A random selection of the employees took Transcendental Meditation (TM) courses that were provided by certified instructors. Typically, this type or meditation involves a person sitting with his/her eyes closed for 20 minutes, twice a day and were asked to think about a specific mantra or sound.

Before starting the courses, they were asked questions to assess their stress level, depression and burnout. Four months later, the same questions were asked.

Examination of the data showed that after four months, the stress levels among participants fell from 39 to 34 on a 40-point scale. According to the study authors, the participants who meditated reported that they felt less stressed and more energetic within only a few days. For those who didn’t take the meditation courses, their stress levels rose two points during the same time period.

“Stress from work can affect employee’s mental and physical health,” says Lori Lovell-Knouse, director of the Good Samaritan Health and Wellness Center in Downers Grove, Ill. “Meditation is a great way to cope with the day-to-day pressure.”

Lovell-Knouse says that using meditating as a relaxation technique can release stress that has accumulated in the system and can also prevent stress from getting into the system. Additionally, she says meditation has been known to lower high blood pressure and decrease tension-related pain.

“If you can’t commit to 20 minutes twice a day, try 20 minutes once a day as a start,” Lovell-Knouse says. “You may start noticing that giving your mind some time to rest helps you feel peaceful overall.”

← Spotting cancer without radiation
How much do online physician ratings matter? →