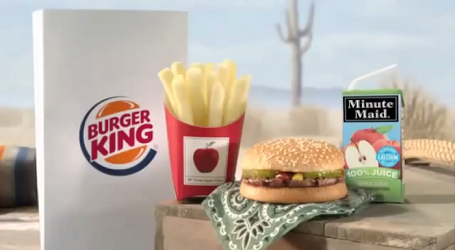 To help stem the tide of obesity in U.S. children, fast food companies agreed in 2009  to show healthy foods in ads targeting children. A new study reveals that how those foods have been depicted in ads for children’s meals have only led to confusion for children and fails to help them make healthier eating decisions.

The study, published in the late March edition of the journal JAMA Pediatrics, revealed that one-half to one-third of children were unable to identify milk and only 10 percent of children could identify sliced apples in advertising images depicting both products.

Nearly 100 children, ranging in age from 3 to 7, were shown McDonald’s and Burger King TV ads promoting healthy kids’ meals that ran in 2010. Researchers showed freeze frames of ads that appeared on various children’s cable networks and asked participants to identify what they saw on the screen. Of the four ads viewed, depictions of milk weren’t communicated well to children who could not yet read and only McDonald’s ads featuring apple slices were identified as apple products by most of the participants, regardless of age.

Although Burger King’s apple slices are sold in a plastic bag, in the ad they were in a french fry container with an image of an apple on the front. One child pointed to the product on the screen and said, “And I see some … are those apple slices?”

The researcher replied, “I can’t tell you … you just have to say what you think they are.”

“The advertisement would be deceptive by industry standards, yet their self-regulation bodies took no action to address the misleading depiction,” added Sargent, co-director of the Cancer Control Research Program at the Norris Cotton Cancer Center in Lebanon, N.H.

A similar study was published last year by Dr. Sargent and his team of researchers, which concluded that although fast food companies had self-imposed guidelines to discourage giveaways to develop brand awareness with kids, their advertising still emphasized it.

← Food cravings? Certain carbs may be the reason
Committing to get fit →