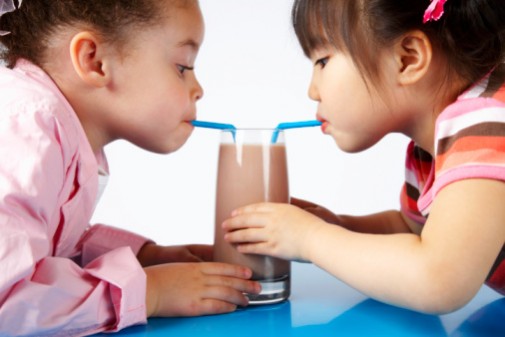 U.S. public schools are finding themselves in a bit of a pickle over a cafeteria item—milk, specifically the chocolate kind. For parents, it provides their kids much needed calcium, and for the kids it offers much needed good taste. In the past few years, however, parents concerned about obesity and sugar levels have protested this once-thought nutritious and delicious beverage and have requested that it not be served in school lunchrooms. Instead, a reformulated version was served with lower fat and more natural sugar.

So what would happen if chocolate milk was actually banned from pubic school cafeterias? A new study reveals surprising results.

The study, published in the journal PLOS ONE in April, found that although total milk sales in elementary schools decreased by 10 percent, students wasted 29 percent more white milk than before they swapped chocolate for white milk. The study also revealed that 7 percent stopped eating school lunches altogether.

Participants in the study included 11 Oregon elementary schools in one district. During one school year, skim and 1 percent fat milk were served instead of chocolate milk to grades K-5. According to the results, after the milk substitution, students consumed fewer calories and less sugar. However, they also consumed less protein and calcium.

Catherine LaBella, clinical dietitian at Advocate Lutheran General Hospital in Park Ridge, Ill., explains that chocolate milk is not all bad. “While I would not say that chocolate milk is necessarily the best dairy choice, for some kids it may be the only source of dairy in their diet. In spite of the added sugar, chocolate milk does contain the same nutrients found in skim or low-fat white milk; these kids will be missing out on a great source of protein and calcium,” she says.

Study co-author Brian Wansink recommended a less restrictive policy considering the nutritional costs. “There are other ways to encourage kids to select white milk without banning the chocolate. Make white milk appear more convenient and more normal to select. Two quick and easy solutions are: Put the white milk in the front of the cooler, and make sure that at least one-third to one-half of all the milk is white,” explained Wansink, director of the Cornell Food and Brand Lab in Ithaca, N.Y.

LaBella adds that the way the nutritional aspect of milk is emphasized can help kids make healthy decisions as well. “Kids can be educated as to why they should choose white milk over chocolate milk and encouraged to think of chocolate milk more as a treat,” she says.