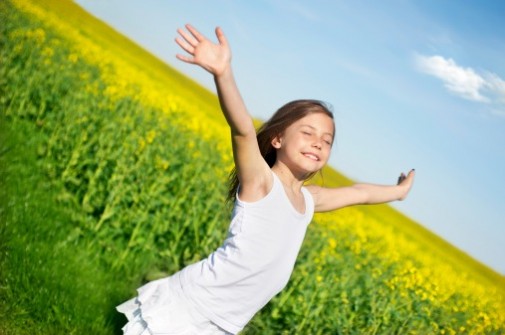 With so much time spent with technology, according to the National Wildlife Federation, “The nature of childhood has changed. There’s not much nature in it.” Getting outside in nature has been found to reduce childhood obesity, boost classroom performance and spur imagination. New research reveals that nature also affects how children define spirituality.

The study, published in a recent issue of the Journal for the Study of Religion, Nature and Culture, found that children who spent play time outside for five to 10 hours each week said they felt spiritually connected to the earth and believed that it was their role to protect it.

Research also uncovered the notion that those children who spent more time outdoors had a stronger sense of self-fulfillment and purpose compared to those who don’t.

“In the world’s major religions, in sacred texts, there abound stories of lessons learned from the seasons and from nature,” says Rev. Stacey Jutila, vice president of mission and spiritual care for Advocate Children’s Hospital.

“There is a Jewish tale of a Rabbi who finds his son reading the Torah, while sitting in a tree. The father proclaims, ‘Son, don’t you know that the wisdom of the Torah is the same, whether you are in the synagogue or in a tree?’ The boy proclaims, ‘Yes, that is true, but I am different when I read it while sitting in the tree,’” she explains.

Researchers studied 10 children ranging in ages from 7 to 8 years old. Most of the children came from families with a Christian background. Participants in the study shared feelings of peacefulness at being in nature. Some even believed that a higher power had created the natural world around them. These children also reported feeling humbled with a sense of awe by acts of nature such as storms. At the same time, they also expressed feelings of happiness and a sense of belonging in the world.

“As we speak with children about the wonders of faith, of God, and spirit, nature provides us with active and living metaphors for hope, grief and loss, and change,” says Jutila.

She sees this take place through experiences her daughter, a toddler, is having. Jutila explains that her daughter’s daycare has had caterpillars that they have faithfully watched in recent weeks, and with joy, the children have seen these hungry caterpillars transformed into living butterflies. “As we pray at the dinner table and before we go to bed at night, I can talk with her about God’s love being ever present and ever transforming and like a caterpillar, we too can be transformed in new and amazing ways,” she says.

“Beyond a sense of peace and well being occurring in nature, children also learn a sense of reverence, awe and respect for the world, as we take part and delight in the natural world,” Jutila adds.