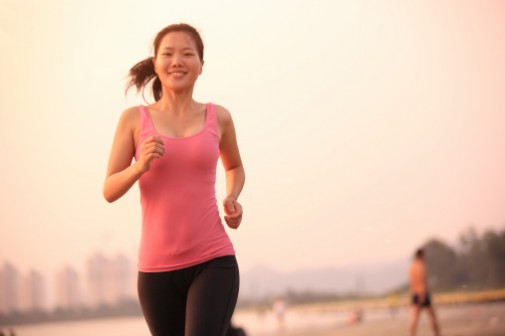 A new study shows that running even just for a few minutes every day can reduce the risk of death from cardiovascular disease. The study, published in the Journal of the American College of Cardiology, says that even leisurely running can contribute to lowering this risk as oppose to those who do not run at all.

The study looks at exercising under the advised 75 minutes per week. Researchers wanted to take a closer look at the effects of what leisurely to moderate activity levels can do to your health—and the results are promising.

The study consisted of 55,137 adults between 18- and 100-years-old, over a 15 year period. Researchers observed how running effected how long they lived and risks for cardiovascular disease. The participants filled out a questionnaire explaining their running habits. During the 15 years, about 3,400 participants died. About 1,200 of those died of cardiovascular disease.

About 24 percent of deceased participants had said that they leisurely ran. Runners lived an average of three years longer than non-runners, according to the study.

Running even just a couple times of week made a difference compared to those who did not run at all. Study leader and assistant professor at the Iowa State University Kinesiology Department Dr. Duck-chul Lee said, in a statement, “Running may be a better exercise option than more moderate intensity exercises for healthy but sedentary people since it produces similar, if not greater, mortality benefits in five to 10 minutes compared to the 15 to 20 minutes per day of moderate intensity activity that many find too time consuming.”

The study concluded that those who ran less than an hour per week had the same benefits as those who ran three hours a week. This means that even leisurely running can contribute to reducing cardiovascular diseases and death. Looking at longevity behavior, those who consistently ran over the course of a six-year period had a 29 percent decreased risk of death, and a 50 percent lower risk of heart disease or stroke, the study says.

Heart disease is the leading cause of death for men and women, according to the Centers for Disease Control and Prevention (CDC). The CDC also says that about 600,000 people die in the United States every year from heart disease. Lifestyle choices and inactivity are major causes of heart diseases, so get moving and start running—even if it is just five minutes a day.

← What to expect in orthopedic surgery
Outliving cancer →