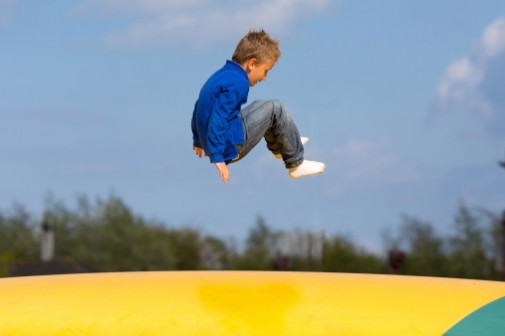 Children and adolescents love jumping on trampolines. Patented as a “tumbling device” as early as 1945, trampolines have been growing in popularity ever since.  Once found only in backyards, today there are commercial trampoline parks popping up in many communities.

But many medical professionals are stepping up to warn parents that trampolines are dangerous. A recent study, from an Indiana University School of Medicine researcher, found that from 2002-2011 there were nearly 300,000 visits to emergency rooms in the U.S. due to backyard trampoline accidents. In fact, by some estimates, medical, legal and disability costs, resulting from trampoline injuries, add up to more than $4 billion each year.

“It is very rare that a month goes by without a child coming to my office with a trampoline injury,” says Dr. Andrea Kramer, a pediatric orthopedic surgeon at Advocate Children’s Hospital in Park Ridge, Ill. “I see many leg, hand and foot fractures, but I have also seen much more serious compound fractures. And when there is a growth plate fracture, it can be severe enough to affect future growth.”

It’s the potential for serious injuries and broken bones that prompts, Dr. Kramer, the American Academy of Pediatrics and the American Academy of Orthopaedic Surgeons to discourage the use of trampolines. From what Dr. Kramer has seen in her office, she believes it is just too hard for children to follow the rules, which call for only one person on the trampoline at a time.

“The injuries I see usually occur when multiple children are using the trampoline,” she says. “In particular, it is usually bigger kids trying to make little kids go higher and higher that causes the greatest problems. The result is usually the youngest child getting hurt most seriously.”

In recent years, safety measures have been taken by manufacturers to lessen the risk of injuries. If you do allow your child to jump on a trampoline, experts say parental supervision is extremely important. But for some parents, that just isn’t the answer.

Dr. Kramer says her 11-year-old son often asks, “When are we going to get a trampoline?” Her answer is simple. Never.