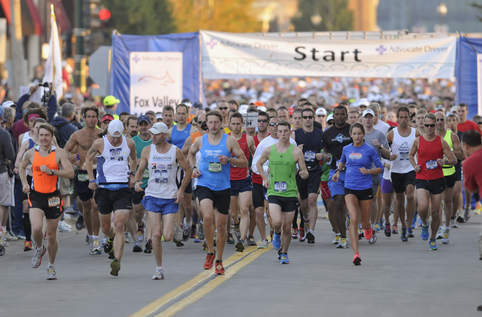 When the thousands of runners bolt from the starting line at the 5th annual Advocate Dreyer Fox Valley Marathon on September 21, a team of medical experts will be with them every step of the way.

From sprains, strains and blisters, medical personnel will treat dozens of racers along the 26.2 mile course. Race officials say the volunteers play a critical role in the health and safety of the runners.

Lindy Cain, a certified athletic trainer and the sports medicine coordinator for Advocate Dreyer Medical Center in Aurora, Ill., oversees the nearly 50 clinical volunteers spread out from start to finish.

“Our medical volunteers love it, they get hooked,” she says. “They are so dedicated. They deserve a lot of high-fives.”

Cain says the medical teams include physicians, physician assistants, nurse practitioners, nurses, athletic trainers, and more. The teams staff 15 medical stations along the route ready for anyone who stops with an injury.

“Most of what we see is related to heat exhaustion and dehydration,” Cain says. “Even though most people train well for the event, there are always a number of folks who run into problems.”

In the four years Cain has been helping at the event, she’s only seen a few situations that required a trip to the emergency room. Most of the runners are treated on the course or at the main medical tent and sent of their way.

“We probably average 100 or so people who need some kind of medical attention during the race,” Cain says. “We see some runners who didn’t train enough and start to cramp up along the way. Blisters are really common too.”

Though some make it look easy, completing a marathon is one of sports’ toughest challenges. A mere 0.5 percent of Americans have completed the demanding race.

But despite the grueling demands of the event, the number of people running marathons has increased steadily, according to Running USA. In 1976, there were just 25,000 marathon finishers compared to just over a half-million in 2011.

Seeing first-hand the toll marathons can take on the body, Cain offers some advice for newbies.

“Prepare for the worst but assume the best,” she says. “It might be hot, it might be cold. It’s all about being prepared mentally. Assume you’re going to do great!”

← Is losing your hair a sign of cancer?
Yoga benefits for moms-to-be →