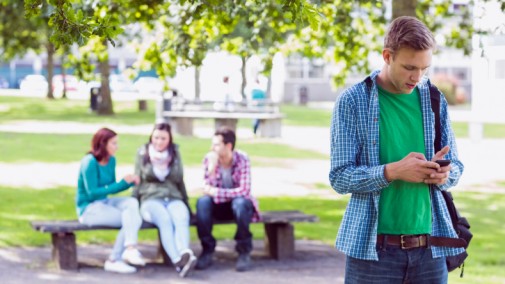 Researchers at Baylor University say they were astounded to discover that college students are spending an average of 8-10 hours a day connected to their smartphones. The excessive use is cause for concern, they say.

Study leaders surveyed 164 college students and asked about 24 different cell phone activities including texting, email and social media. The findings were published in the Journal of Behavioral Addictions.

Nearly 60 percent of those surveyed admitted to being possibly addicted to their phones and reported they get “agitated” if they lose sight of the device.

The article titled, “The Invisible Addiction: Cellphone Activities and Addiction among Male and Female College Students,” noted that, surprisingly, gaming was not a primary use. But instead, students are spending more time on Pinterest, Instagram and other social media platforms.

“Cellphones may wind up being an escape mechanism from their classrooms. For some, cellphones in class may provide a way to cheat,” Roberts said. “Excessive or obsessive cellphone use also can cause conflict inside and outside the classroom: with professors, employers and families. Some people use a cellphone to dodge an awkward situation. They may pretend to take a call, send a text or check their phones.”

The findings also showed that texting is the top activity averaging 95 minutes a day, followed by email and time on Facebook.

“We need to identify the activities that push cellphone use from being a helpful tool to one that undermines our well-being and that of others,” Roberts said.