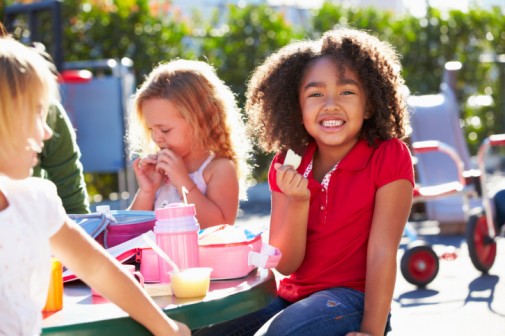 If you went to college, your kids are probably eating healthier than if you didn’t, says a new study.

Researchers at the University of British Columbia surveyed nearly 1,000 students in grades 5 to 8 and found that they consumed fewer sugary drinks and ate more vegetables if their parents were attended college.

The reasons why aren’t entirely clear, study leaders said, but are an indicator that a family’s economic status has a direct effect on kids’ diets.

“We can only speculate on the reasons for the disparities,” said co-author Jennifer Black, a food nutrition and health professor in a news release.  “Higher priced products, like vegetables, may not be the food that gets packed first for vulnerable families that need to make tough choices about school lunches.”

Findings from the study revealed the children were 85 percent more likely to eat more veggies as compared to kids whose parents only completed high school. Kids of parents who graduated from universities were 67 percent less likely to gulp sugar-laden sodas.

But the survey also showed that all kids still have a long way to go in terms of healthy eating regardless if their parents are college educated or not.

“While there are still barriers that exist for low-income children, families from across the socioeconomic spectrum are struggling to get their kids to eat healthy food at school,” Black said. “Our findings challenge this common notion that only low-income families feed their kids junk food because it appears wealthy families are not always making healthier choices either.”

But regardless of their educational achievement, parents can make a positive impact on their children’s healthy eating habits by setting the example, experts say.

“An easy way parents can help shape their children’s eating habits is to give them exposure to better ways of doing things and get them to participate,” Fine said. “Kids even preschool age can be involved in going to the store, for example. Color is a wonderful way to get them to participate. Have them pick one green thing for dinner so they’re part of the mealtime process.”