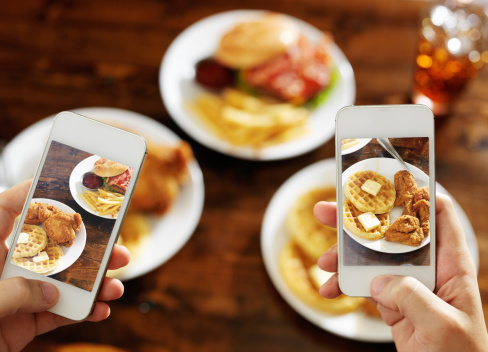 You know all those mouth-watering Instagram and Pinterest photos of delicious meals your friends post? They make you hungry, don’t they? Uh, apparently not. Research from Brigham Young University (BYU) reveals that when we look at too many food pics, we’re less inclined to eat.

The reason? According to the study published in the Journal of Consumer Psychology, the pictures make you feel like you’ve already eaten so you no longer have an appetite.

“In a way, you’re becoming tired of that taste without even eating the food,” said study co-author Ryan Elder in a statement. “It’s sensory boredom—you’ve kind of moved on. You don’t want that taste experience anymore.”

Elder along with his co-author Jeff Larson, both marketing professors at BYU’s Marriott School of Management in Provo, Utah, had a theory that when people are overexposed to food images, their so-called satiation increases. The researchers defined satiation as “drop in enjoyment with repeated consumption.”

The participants then rated how appetizing the food in each picture appeared. Each participant then finished the experiment by eating peanuts and rated how much they enjoyed eating the peanuts.

Those who viewed pictures of salty foods found the peanuts less enjoyable, even though they had not viewed images of peanuts, just other salty foods. The researchers concluded that the participants “satiated” on the specific sensory experience of saltiness.

“If you want to enjoy your food consumption experience, avoid looking at too many pictures of food,” said Larson. “Even I felt a little sick to my stomach during the study after looking at all the sweet pictures we had,” he admitted.

The authors explained that the effect increases the more pictures you view.

“You do have to look at a decent number of pictures to get these effects,” Elder said. “It’s not like if you look at something two or three times you’ll get that satiated effect.”

So if you’ve only got a few friends who post food pics on your social media feed, you’re probably OK to keep following them.

← Cyber dating abuse on the rise
Can kidney stones lead to heart problems? →