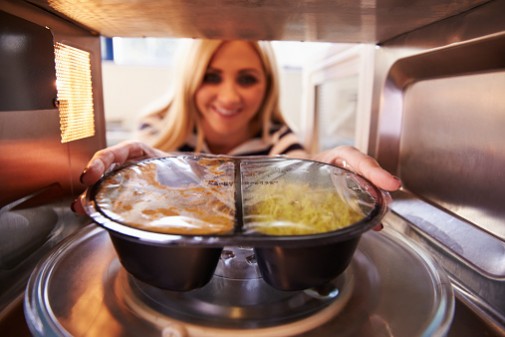 That prepackaged meal for lunch might be a bit on the salty side.

Convenience meals exceed federal guidelines on sodium more than 70 percent of the time, according to a recent study released by the Centers for Disease Control and Prevention. Prepackaged foods typically containing more than the recommended daily amount of salt or sodium include pasta dishes, meals with meat and pizza.

“A lot of people don’t really pay attention to the sodium in prepackaged foods because they don’t necessarily taste salty,” says Julie Tjhio, registered dietitian with Advocate Illinois Masonic Medical Center in Chicago. “It’s really important to read nutrition labels, even on items that are labeled as healthy.”

The CDC team looked at 3,800 prepackaged food products for the study, many of which are labeled as “healthy.” Researchers also found that 50 to 70 percent of packaged cold cuts, soups and sandwiches exceeded the Food and Drug Administration’s guidelines for labeling standards.

Prepared foods should contain no more than 600 milligrams of sodium, according to FDA recommendations. The daily allowance for healthy adults is one teaspoon, or 2,300 milligrams, of sodium a day. Those with heart disease should cut their intake even further, with no more than 1,500 milligrams recommended each day.

Physicians have long known excessive sodium intake is a main contributor to high blood pressure, which is a major risk factor for heart disease.

Tjhio recommends sticking to whole foods — foods packaged and eaten in their natural states with all natural ingredients intact. These include whole fruits and vegetables and whole grains.

“This is good information from the CDC and something we should all be aware of,” Tjhio says. “Just because a food product says it’s healthy, it doesn’t necessarily mean it is.”

← Say goodbye to varicose veins
How much is too much homework? →