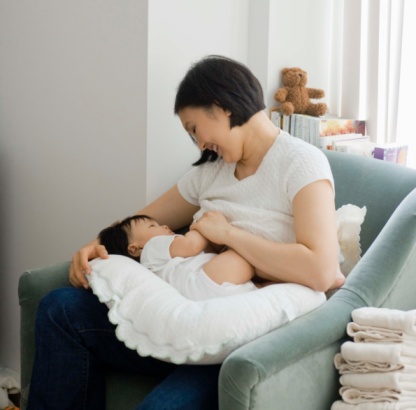 Instagram received backlash for removing a photo of a woman breastfeeding, but recently the company updated its terms of use allowing for these photos to be posted.

While companies and public places have become more open to breastfeeding, some still feel a stigma remains in large part due to some of the misconceptions.

Dr. Judith Cothran, obstetrician/gynecologist at Advocate Trinity Hospital in Chicago, discusses the truth behind some of these myths.

Babies are no more likely to have separation anxiety, and actually have better socializing skills if they are breastfed.

Some anxiety with separation may be a sign of good emotional development.

“The baby will never want to stop breastfeeding”

At around 6-months-old, pediatricians recommend introducing soft, solid food. Breast milk tastes like what the mother eats, so they may be more accepting of solid foods than formula-fed babies. Also, they are less likely to have food allergies.

“I’ll sleep less if I breastfeed”

There’s no evidence that moms who formula feed get more sleep than moms who breastfeed, and the reverse may be true. With less time used traveling to the kitchen to heat up a bottle, you are more likely to get back to sleep faster.

Moms don’t have to get out of bed or even turn on the lights, you just take the baby into bed with you, feed them, and put the baby back down. Many moms who breastfeed say that they never fully wake up to feed the baby.

“It hurts and will make my breasts sag”

Sagging breasts are more a result of genetics, and breastfeeding will not make them droop more, according to University of Kentucky research.  And, proper breastfeeding should not hurt.

If it does, it may mean that there is a problem with the latch or sore nipples due to chafing.  See a lactation consultant or postpartum nurse if that is the case.

“I can’t drink or smoke”

Ingestion of alcoholic beverages should be minimized and limited to an occasional intake but no more than .5 grams of alcohol per kilogram of body weight, which for a 60 kilogram mother is approximately 2 ounces of liquor, 8 ounces of wine, or 2 beers, according to the American Academy of Pediatrics.

Nursing should take place two hours or longer after the alcohol intake to minimize its concentration in the ingested milk.  Smoking is never encouraged due to health risks to mom and baby.

A recent study by Oxford University shows that if you quit smoking while pregnant, breastfeeding may help you kick the habit permanently, more than if you didn’t breastfeed.

The Oxytocin released is a stress reliever and helps keep moms calm and relaxed. It helps relieve anxiety and can reduce the risk of postpartum depression.

Most moms find that it’s easier than they thought it would be and learned the skill quickly.  It’s much cheaper, and most people find that they like it and are happy they made that choice.

Typically when moms are educated about the benefits of breastfeeding, they are open to giving it a try.