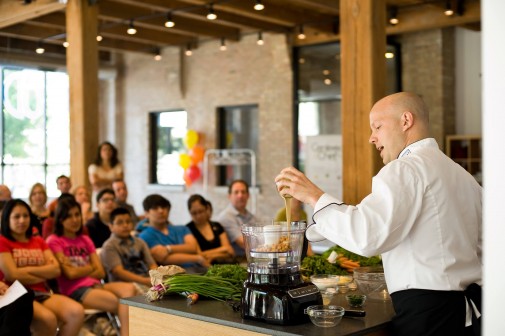 Ryan Hutmacher has appeared on nearly every television network, rising to stardom on ABC’s “The Chew,” a nationally televised cooking contest to find the new Weight Watchers chef.

Today, Hutmacher is the co-founder of Centered Chef, and recently was named “The New Face of Healthy Cooking,” with clean, simple and a sexy cooking style winning him acclaim.

“Clean stands for fresh ingredients,” says Hutmacher. “Simple represents recipes with five to seven ingredients. What you see is what you get. And, sexy, that’s how I showcase food, since we eat with our eyes.”

But, his cooking style and culinary school were not even a thought a decade ago in his physician’s office when he was diagnosed with weight gain, high blood pressure, cholesterol and concern over pre-diabetes.

Instead, Hutmacher committed himself to changing and to reinventing himself.

“It wasn’t just about food and eating too much,” Hutmacher says. “I needed to align my passions with my goals and behaviors.”

And Hutmacher did change — in a big way.

“I went from being winded in tying my shoes, to finishing a triathlon and an iron man competition,” he says. “It did not happen overnight; there is no magic pill. I also embraced culinary school. I took my love of food and made it my career passion.”

Hutmacher offers this advice to those trying to lose weight:

Hutchmacher is the guest speaker for Women’s Night Out, a program at Advocate Lutheran General Hospital on May 14. For more information or to register, click here.