Home / Behavioral health / Why you keep scratching that itch

Why you keep scratching that itch 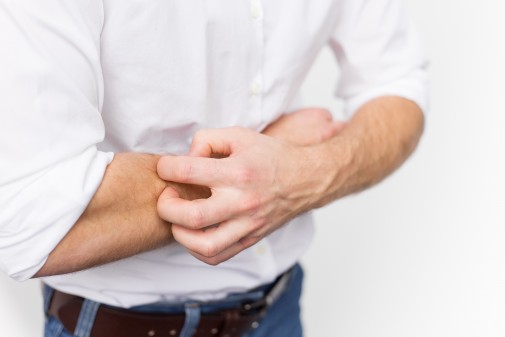 Itching and scratching is all too common during the summer months thanks to mosquito bites, infections from poison ivy and sunburn. While it is generally known that scratching an itch is bad, it can be difficult to deny yourself the simple relief.

After a recent study from the Department of Dermatology and Temple Itch Center at Temple University School of Medicine, researchers now have a better understanding of why scratching an itch evokes such a rewarding and pleasurable sensation.

Using advanced MRI imaging, researchers studied brain activity when subjects scratched an itch and found that the areas of the brain involved in motor control and reward processing became active when an itch was scratched.

“There is a significant instant gratification from itching,” says Dr. Rania Agha, board certified dermatologist who treats patients at Advocate Good Samaritan Hospital in Downers Grove, Ill. “However, this gratification is followed by a vicious cycle of scratching and itching, and it takes a tremendous amount of willpower for one to interrupt this cycle.”

Study leaders found that brain activity in these areas was especially high in patients with chronic itch, which is a symptom that occurs in many medical conditions and in response to certain drugs.

“Itching accounts for millions of dermatology visits annually,” Dr. Agha says. “It is important to recognize any underlying illnesses and treat accordingly.”

Patients suffering from any type of chronic itch should make an appointment with a physician in order to determine the underlying cause of the itch, Agha recommends. She encourages patients to recognize the addictive behavior of scratching and itching, and to cope with it appropriately.

Under the care of a physician, if the underlying cause is corrected, the itch can improve, and in many instances topical as well as oral medications are prescribed.

“The skin is the window through which we can determine internal diseases,” says Dr. Agha. “Chronic itch can be a sign of system failures in our bodies, such as the kidneys and liver, and also of psychological distress.”

← Student doctors test their skills in rural Africa
Are skinny jeans dangerous to your health? →