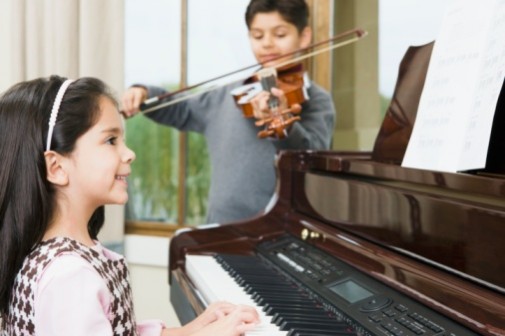 The old adage “practice makes perfect” is instilled in many children at a young age.

Michael Jordan, Yo-Yo Ma and Bill Gates all say hours of practice equals success, but it could be their genes that made them so successful, according to a new study.

“Predisposition plays an important role for auditory-motor learning that can be clearly distinguished from training-induced plasticity,” Dr. Robert Zatorre said in a news release. “Our findings pertain to the debate about the relative influence of ‘nature or nurture,’ but also have potential practical relevance for medicine and education.”

Researchers looked at brain imaging studies of 15 young adults with little or no musical background who were asked to learn simple piano pieces. Brain scans were performed before and after their six-week musical training session to better understand the development of the brain.

Imaging before the piano lessons determined that certain participants would learn the skill more quickly based on the brain waves in a particular set of brain structures.

Dr. Melvin Wichter, chair of neurology and co-director of the Neurosciences Institute at Advocate Christ Medical Center in Oak Lawn, Ill., believes there is some truth to the ability to picking up a talent versus being born with the ability.

“The brain is an amazing structural organized unit that we have just begun to scratch the surface on understanding its function,” says Dr. Wichter. “Some people have the ability to pick up an instrument and play it with ease, while others have to practice for hours. But, I believe we all have a talent that we can really focus and become extraordinary at.”

Dr. Wichter adds that although the study’s subject group is small, it’s a good start to developing a broader understanding.

Study leaders hope that the research can help to develop custom-made interventions for students and for neurological patients based on their predisposition and needs.