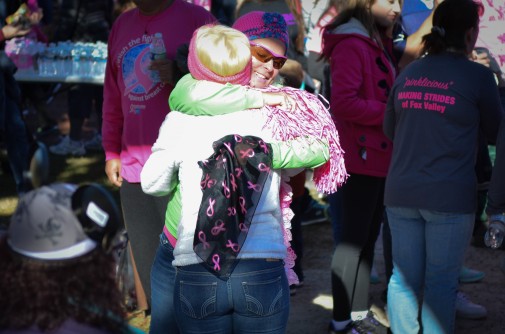 Heather Ingo-Nutile could sense something was wrong.

She was feeling fatigued and sick all the time, and later found a lump. At 32 years old, Ingo-Nutile was diagnosed with Stage 3b breast cancer, also known as triple-negative breast cancer.

“We were worried I wouldn’t survive more than five years, but I have been living and thriving for more than a decade now,” says Ingo-Nutile. “None of those years, days, hours or minutes have been easy, but they all have been worth the fight.”

Between 10 and 20 percent of breast cancers are found to be triple-negative, according to Breastcancer.org. During an initial diagnosis, tests are performed to search for the presence of three receptors (or proteins) in the cancer cells. If all receptor tests come back negative, the cancer is classified as triple-negative.

Studies have shown that triple-negative breast cancer tends to be more aggressive than other types of breast cancer. The disease is more common in women under age 40, and is typically treated with a combination of methods such as surgery, radiation therapy and chemotherapy.

“They shouldn’t consider this a death sentence,” says Dr. Rajini Manjunath, oncology-hematology specialist at Advocate Sherman Hospital in Elgin, Ill. “All triple-negative breast cancer patients are not the same, and there are those who have a great response to treatment with long-term survival rates.”

Ingo-Nutile was treated at the Cancer Care Center at Advocate Sherman Hospital, where she had a radical mastectomy on her left side. The Elgin resident also underwent eight rounds of high-dose chemotherapy, and continued to work the daycare job she started while receiving that treatment.

“When I saw her for the first time, I was introduced to a very young and beautiful woman diagnosed with a terrible disease,” says Dr. Manjunath. “Chemotherapy was hard for her, but she is the kind of person who deals with things head on. She was very courageous.”

Nutile, now 44 years old, is a recognized advocate for breast cancer awareness, working with the American Cancer Society’s Young Survival Coalition and several online support groups to help woman affected by breast cancer all over the world. Her cancer was upgraded to Stage 4 after a small nodule was found on her left lung, but it is currently stable.

“I want young women to know there is a lot of life left after a breast cancer diagnosis, even when that diagnosis is an aggressive form of cancer,” says Ingo-Nutile. “As women, we tend to put the needs of others in front of our own. It’s how we are wired. I learned that if I’m not here, I can’t take care of anyone.”

← 4 things to know about antibiotic resistance and meat
Bosom buddies →