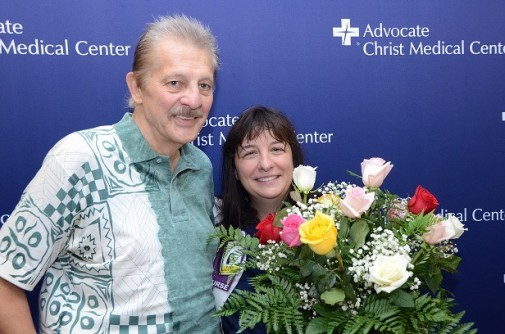 On November 19, 2011, Gerald “Jack” Boekeloo died after suffering a heart attack. Today, he says he is feeling good, has started exercising regularly at home and feels his muscles getting stronger every day.

Confused? Boekeloo “died” in his car, but he was revived from cardiopulmonary resuscitation (CPR) by a good Samaritan who was driving by and witnessed his vehicle careened into a parked car.

“If it weren’t for the good Samaritan who acted swiftly and correctly administered CPR, Jack would not have made it,” says Dr. Thomas Levin, a cardiologist with the Advocate Heart Institute at Christ Medical Center. “Although he ‘died’ again upon arriving at Christ, I believe the initial and quick administration of CPR made it possible for his lungs to revive again.”

According to the American Heart Association (AHA), only 32 percent of cardiac arrest victims receive CPR from a bystander. Fortunately for Boekeloo, the good Samaritan who saved his life was Dawn Bausone-Gazda, a CPR-certified nurse at Christ Medical Center who was driving by at the time of Boekeloo’s heart attack.

“That day, I didn’t have any pain. I felt like falling to the floor and going to sleep. I was just so tired—I wanted to sit there and die,” Boekeloo recalls. He says he knew something was wrong and that he had to get to the hospital fast, which is where he was heading at the time of the heart attack.

Boekeloo not only lived to tell the tale, but he is thriving since undergoing multiple procedures at Advocate Heart Institute, including a procedure to insert a ventricular assist device (VAD) and eventually, in April of 2013, a successful heart transplant.

“I would do it all over again. It was worth dying for,” says Boekeloo about the experience. “How many people can say they have an angel? I can, and words just can’t explain what it feels like to meet the person who saved your life.”

A study from the University of Southern California Davis School of Gerontology suggests that less than four in ten individuals are saved by CPR administration. Thanks to Bausone-Gazda’s fast-acting, Boekeloo is one of the survivors.

The AHA says that 70 percent of Americans may feel too helpless to act during a cardiac emergency because they either do not know how to administer CPR or their training has significantly lapsed, but with more than 300,000 people suffering cardiac arrest annually, knowing CPR is more vital than ever.

← Do you know your calcium score?
Skin cancer rates rising in young women →