Distracted driving is a leading cause of car accidents 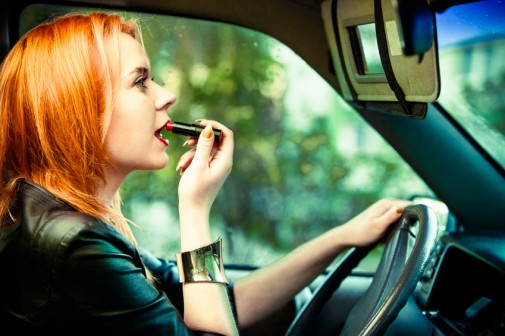 The dangers of texting while driving are well-known, but a new study found that it’s not the only dangerous distraction.

Researchers from the Virginia Tech Transportation Institute found that two-thirds of drivers are distracted in the seconds before an accident. Cellphones were the most common cause, but drivers were also distracted by reading or writing, reaching for something or using a touchscreen on their dashboard.

They estimate that engaging in distracting activities while behind the wheel more than doubles the risk of a crash. Still, more than half of the drivers in the study did so.

“We tend to underestimate the hazards of driving because we do it so often and it’s a critical part of daily life, but we shouldn’t take our safety for granted,” says Dr. Sandhya Nagubadi, an internal medicine physician on staff at Advocate South Suburban Hospital in Hazel Crest, Ill.

To accurately track people’s driving habits, researchers installed interior video cameras and other tracking devices in more than 3,500 cars and followed volunteer drivers ages 16 to 98 over a three-year period. Previous studies have relied on experiments with test drivers and reports from crash investigations. In those instances, it was difficult to determine what exactly happens in those critical seconds before an accident occurs.

“Traffic accidents are so common that they are the leading cause of death for American teens,” says Dr. Nagubadi. “States across the country have enacted laws banning cellphone use while driving, but clearly the problem persists.”

In 2014, there were more than 6 million automobile accidents reported to police, in which more than 30,000 Americans died and another 2.3 million were injured, according to statistics from the U.S. Department of Transportation’s National Highway Traffic Safety Administration (NHTSA).

NHTSA recently reported a steep 9.3 percent increase in traffic-related deaths for the first nine months of 2015, as compared to 2014. Previous research estimates that human factors contribute to 94 percent of crashes.

“If you need to make a call or send a text, pull over for a moment and do it safely. You have to ask yourself, is this one thing so urgent that it’s worth more than our lives?” says Dr. Nagubadi.

If you want to drive safely, Dr. Nagubadi offers these suggestions:

← Does a divorce increase your chances for a heart attack?
Do you know your calcium score? →